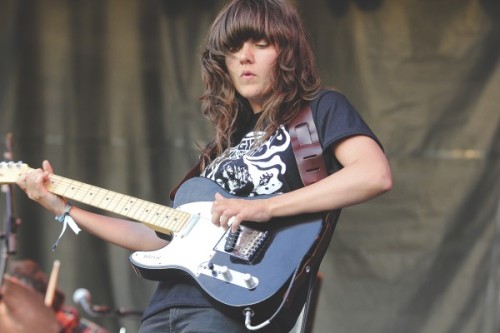 It’s well past time I hop onboard the Rainbows in the Dark bandwagon, and I’ll start with Courtney Barnett. The Australian singer-songwriter’s been high on my list all year, thanks to both the success of her debut full-length, Sometimes I Sit and Think, and Sometimes I Just Sit as well as a terrific gig at the Bowery Ballroom last month in support of the album. But this post isn’t about that album. Instead, we’re going to take it back a couple of years.

“Don’t Apply Compression Gently” is a highlight on Barnett’s second EP, How to Carve a Carrot Into a Rose—released in 2013. The song serves as a perfect example of the term “less is more.” Its three-and-a-half minutes contain just a single, D – A – C – G chord progression, repeated throughout with only a slight hint of overdrive to create a relaxed feel that it’s hard not to get on-board with. The refrain’s clean melody and the ever-so-slight keyboard work in the background only add to this effect—musically, it’s the perfect song to put your feet up and be lazy to.

And Barnett is the perfect voice for that kind of tune. A lyric like “I may not be 100% happy but at least I’m not with you” taken at face value might seem to be picking a fight, but with her delightfully unbothered delivery, it actually strikes a perfect tonal balance; she’s able call out shortcomings in both herself and her apparent “other”—whomever or whatever it may be—without letting herself become beholden to them.

Barnett’s been heavier, and she’s been more introspective, but I don’t know that she’s ever been this purely enjoyable. Sample it for yourself and you’ll see what I mean.