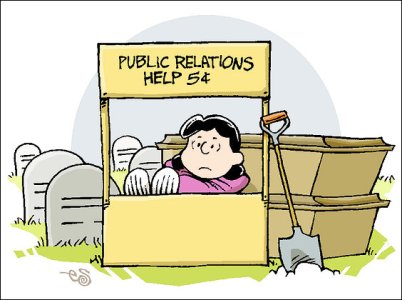 OK, so you’ve finally taken my advice and decided to hire a publicist, you now know that this is the best way for you to increase your visibility. So to help you with this big step I’ve compiled a few things you may want to avoid in search of a publicist.

“What’s a bargain bin PR”? A bargain bin PR is somebody who promises you that for $50-$100 that they will give you an awesome campaign. Trust me, almost anyone who charges you that low is ripping you off. You have no idea how many times I’ve had bands tell me that they’ve trusted their money to some budget PR called SLAYTANIK GOATS PR or something and had substandard results. “But they’re cheap!” Yeah, so is the dollar store. If you bought a $10 computer at the dollar store you would know that you were probably getting a shitty product. Same with anything. IF IT’S TOO CHEAP, IT’S PROBABLY NO GOOD. Granted, not every high priced PR (or anything else) is going to give you awesome results 100% of the time, but you have a much better chance than hiring someone for $25 who is buddies with a zine called HAIL BLASPHEMOUS GOATS or something.  Reversely, if you are just starting out, do not bother with getting *too* pricy of a PR. Use your judgement.

2. DO NOT PUT YOUR MUSIC ON BANDCAMP/ITUNES/SPOTIFY/TIDAL OR WHATEVER PRIOR TO HIRING A PUBLICIST.

While this does not make their job impossible, it does make it more difficult. Most sites will not stream non-exclusive tracks, so your dream of getting a track at Metalsucks will most likely be crushed by this one action alone. Don’t do it.

3. DO NOT HIRE ANOTHER PUBLICIST WITHOUT LETTING YOUR CURRENT PUBLICIST KNOW.

It can be incredibly frustrating to find out that another publicist has been contacting the exact same sites/zines etc. as you about the exact same band. This just doubles work and makes both publicist angry and reluctant to work with you in the future. If one publicist does Europe and another one does North America fine, but other than that DON’T DO IT. And if you do hire one that does Europe and one that does NA, make sure you let both publicists know. The internet makes many sites worldwide, so things will overlap no matter what.

That’s it for this month I hope you enjoyed reading this article. If you have any questions or comments you can visit our Facebook page at : https://www.facebook.com/cdewarpr/ or you can come and talk to me on Twitter @dewarpr.