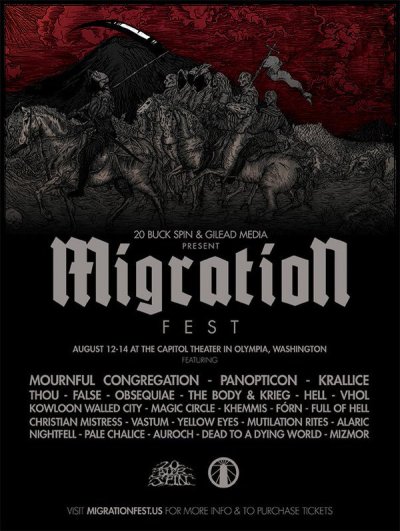 Keeping the recaps and highlights of this past August’s Migration Fest moving along, we move on to our (my) second installment… you can catch the first part here. While the festival certainly jumped out to a good start with the events and bands of both Thursday night at Obsidian and the first night at The Capitol Theater on Friday, there is no doubt that Saturday was absolutely the high point of the weekend. I’ll do my best to recall some of the happenings below. But, ya know, it’s been awhile. And I’ve been busy, because life. No matter! Let us begin/resume.

In the morning leading up to the second night of the festival, we decided to take full advantage of our morning in Olympia and walk off the hangover, find coffee… and then find more beer. A solid walk along the waterfront was supplemented with a trip to the local farmer’s market and some early day drinking at Blind Pig Spirits Distillery, where we sampled some  killer moonshine and vodka. Late morning buzz in full force, we set ourselves up for the opening bands well.

Kicking things off this day was the grandiose gloominess of Alaric. While I personally am still enjoying their latest effort, End of Mirrors, I knew a couple of my fellow attendees did not feel as strongly. However, there is no question that they fully impressed with their half hour set and ended up turning a few new fans around me. Following them was New York’s black metal households Yellow Eyes. I had never seen them live, but I was tremendously impressed by the eeriness of their black metal style. The following bands — Nightfell, Vastum, and Boston’s Fórn — were enjoyed through split time between the balcony and the standing area. All sounded impressive, yet didn’t quite build off the openers as impressively as I would have liked, so, between the end of these bands and the following Christian Mistress, it was time to merch and beer. Because, let’s be clear, we needed to build up some energy for the final bands of the night.

So, after a quick regrouping at Cryptatropa, we doubled back for Magic Circle, a greater Boston band that I have completely taken to since the release of Journey Blind. Naturally, I witnessed a growth in the Dio-era Sabbath influenced doomer’s fanbase with each passing song. One of the top five performances of the weekend for sure. And let’s not forget that I just saw them play in Boston with Skeletonwitch not two weeks prior. We then skipped Thou (to acquire more beer) before returning to position ourselves for… Panopticon.

What were we to expect from the first ever live public performance from Austin Lunn’s black metal project? Both of his most recent albums made our ‘best of’ lists for their respective years, so expectations were high. Couple that with an extended sound check, and we found ourselves both extremely excited… and somewhat anxious. But once the lights dimmed and the music began, there was no denying the care that went into the preparation for this performance and the quality of the product witnessed by all of us. To summarize, it was truly an honor to witness this event. For an hour and a half, we were entranced by the deeply moving black metal that has defined the Panopticon sound in recent years. There is something so incredibly personal about his music, and the way it translated just as effectively in a live performance allowed it to become something that was impossible to turn away from. From the changing colors of the stage backing to the music itself, it was a set nothing short of mesmerizing. On The Subject of Mortality, as promised, was covered in full before we were treated to a wide range of his more recent work. Despite the lengthy nature of this set, the sound and imagery only became more enjoyable and more addicting. When things finally came to a close, and the audience poured its appreciation onto the stage, it was fully apparent how special this night was. Capping it all off, Austin hung back to greet some grateful fans and hand out picks (including to your’s truly) and express his obviously genuine appreciation for everything the crowd just gave him. It was an unforgettable moment for absolutely everyone. The performer appreciated the experience as much as the audience. A rare occurrence.

Does the rest of the night even matter from there? Honestly not really, but we kept this going late into the evening by stumbling into a BBQ place and pounding back bourbon and beers until they kicked us out. There was much to discuss in our collective group, of course. I still can’t really express how much I enjoyed — how much we all enjoyed — this second day of Migration Fest. And the past part about was… we still another day to go… But until then, at least enjoy the pictures above. Some of which are actually legitimate.