The practice of reducing music to genre descriptors can amount to sheer blasphemy. Whether or not a band plays an amalgam of disproportionate elements doesn’t usually matter at all, except for the sake of mention that such a mixture of elements is utilized. It takes a good description of the music to win over some fans, but some of us get sick of genre tags altogether sometimes. With their debut, Feasting On Dark Intentions, Hands of Thieves present an interesting case of a band that plays music far from clear-cut, or typical. Instead, they play an enticing and genre-bending style of death and doom with subtle hints of black metal.

One listen to their release, Feasting on Dark Intentions, will draw a smile from most jaded fans. Heavy like Primitive Man on the slower sections, melodic like Dissection on some blast segments, touched-up by vocals that don’t make use of vocal effects, and is suitably aggressive, Hands of Thieves’ Feasting on Dark Intentions is perhaps Transylvanian Tapes’ best release thus far. Considering the vaunted label has had many golden moments releasing underground material, the proclamation may be difficult for a fan to realize without listening to this release. Save your presumptions for later because Hands of Thieves writes some interesting material on Feasting… It is enough to warrant more releases, and should easily win over fans who can tell good material apart from the protoypical major label waste that clogs many eardrums with superlative mediocrity. More Hands of Thieves please… 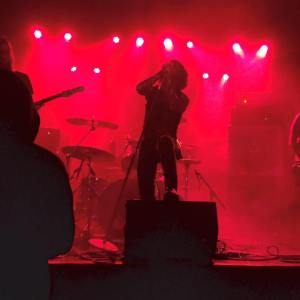 Minimal, heavy, primal, brutal and so many adjectives that describe just how tightly played and meticulously constructed the music is, Feasting on Dark Intentions doesn’t ratchet up the technical play, nor does it feature typical melodic black metal as it has been played to pointless repetition. The riffs just hint at melody while blasting with sheer barbarity, and the slow chugging sections are heavy, bombastic downpicks of the sixth and fifth strings that seem perfect for a soundtrack to a tsunami.  The band must be part of some next wave of blackened doom that fans of genre-bending bands will clearly support. So, if something new in metal entices you, and authenticity is a parameter that you cannot do without, check out this band and support the release of Feasting on Dark Intentions. Music of a dark, antithetical nature will appeal to fans who feel indefatigable for dark art. Simple but catchy, unquestionably dark and insidious, fast and slow on sections that are properly spaced and pieced together, Hands of Thieves’ Feasting… will either have you addicted to their music, or sever you from the metal scene like a limb afflicted with gangrene. So be it.

Feasting On Dark Intentions is available now on Transylvanian Tapes. For more information on Hands of Thieves visit the band’s Facebook page.