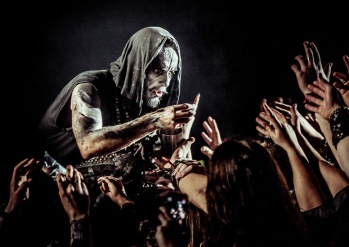 Welcome back to another edition of Receiving the Evcharist. It is my pleasure to once again bring you the finest pairings of metal and alcohol. Tonight’s offering of unholy libations is an album, and brew, that reveal so much hidden beneath their surfaces when carefully examined.  The Metal: Ustalost’s The Spoor of Vipers.  The Booze: Lagunitas’ Wilco Tango Foxtrot.

The Metal: Ustalost – The Spoor of Vipers

Ustalost is the solo project of Will Skarstad: guitarist, vocalist, and one of the primary composers of New York black metal heavyweights Yellow Eyes. Yellow Eyes, for my money, are my favorite black metal band operating out of the United States currently, and are one of my favorite metal bands bar none, so upon learning one of the members had released new material I knew I had to check it out, and I was far from disappointed. The Spoor of Vipers is a monumental debut. It captures you immediately with it’s unique, hellish atmosphere, but with each repeat listen something new surfaces. The intricate way different instruments are layered and arranged means that when one takes the melodic lead — whether the bass guitar, keys, or electric guitar — the others fall back and provide textural background that enhances the lead work. The production on this album, while bearing the expected rawness of black metal, is still carefully crafted so that no instrument is lost in the mix and there is just enough fuzz and murk to enhance the atmosphere. The Spoor of Vipers always delivers something new, and that’s why six months after its release it is still in heavy rotation.

Much like the aforementioned Ustalost album, Wilco Tango Foxtrot is a beer that doesn’t give up its entire profile without a bit of work. Billed as “not in the red or in the black”, the ale is a mixture of the hop-forward bitterness of a red that finishes with the malty roastiness and light sweetness of a brown. The contrast between the strong hops and mild malt finish may confuse some, but taking the time to savor each sip makes the drink, as a whole, make sense. And as a result, one can pick out subtle notes of caramel that expertly balance out the piney hop flavor that initially seeks to take over. Sitting at 7.85% ABV this is a pretty strong offering, yet there is so much going on with regards to the dueling red/brown flavor profile that the booziness is hardly noticed, and it ends up being a pretty smooth drinker. Still, this is a beer that begs you to take your time with it, smooth drinking or not. Pace yourself, give it consideration, and you’ll be rewarded.

Both The Spoor of Vipers and Wilco Tango Foxtrot show that you have to be willing to invest time and attention in some things to get the most out of them.  Go back and listen to that album you weren’t sure about from the beginning of the year.  Pick up a beer you tried but thought was too out there for your taste.  Who knows, you may end up finding your new favorite thing.

Until next time, cheers.

3 thoughts on “Receiving the Evcharist: Ustalost and Wilco Tango Foxtrot”