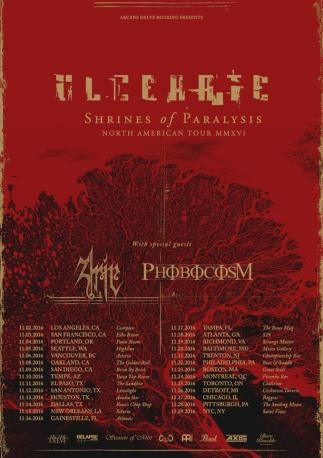 Welcome to another edition of In the Flesh, a recap of the best live metal has to offer. On the 2nd of November, I had the extreme pleasure of catching New Zealand’s Ulcerate on the opening date of their Shrines of Paralysis North American tour, featuring support from Montreal’s Phobocosm and Zhrine from Reykjavik, Iceland.  These three bands, from vastly different parts of the world, getting together on one bill was like the stars lining up, and it proved to be one of the most crushingly heavy shows I have seen in recent memory.

The venue for this inaugural show was the Complex in Glendale, CA. Since moving to Southern California three years ago, the Complex has become my favorite spot to catch live metal in the area for numerous reasons. For one thing, it’s only a 15 minute drive from where I live, which makes fitting live music into my schedule a breeze. More importantly, however, the venue consistently books the best of the best when it comes to metal tours, from all across the spectrum of extreme music. Best of all, the Complex is small enough to offer a very intimate concert experience. Throw in a bar with an always above par beer selection (that I unfortunately was not able to partake in this time due to recovering from an illness) and you’ve got a recipe for a venue that I’ll visit again and again.

The first band of the night was Phobocosm. I will admit that they were the band on this bill that I knew the least about, but I was confident they would be up to par with their tour mates. As it turns out, I was absolutely right. From the first deep, growling notes of their set, I was hooked. Their songs were winding pieces of doomy death metal that felt like they were dredged up straight from the core of the earth itself. The band possessed a sound that overtook the room and entranced everyone who watched them. They inspired me enough to hand over the last of my cash in exchange for one of their t-shirts, and left me with a willingness to check out more of their music.

Next up was Zhrine, and the excitement in the air for this band was absolutely palpable. If you’ve been following my writing here on Nine Circles, you already know the esteem with which I hold Iceland’s metal scene. Zhrine came at me out of nowhere earlier this year with their debut album Unortheta, and here at the end of the year I can say that it is still one of my favorite things I have heard all year. I never thought I would get the chance to see these songs played live given how infrequently bands from the Icelandic scene make their way over to these shores, so when I found out they would be a part of this tour I made sure that I would catch it. Judging from the reaction of the crowd, everyone else there was just as excited to see the band in action as I was, and Zhrine delivered on that energy in spades. Ripping through most of Unortheta as their set, the band expertly balanced the light and dark nuances of their album. Death metal aggression and the black metal psychedelia Iceland is so famous for were tempered with jazzy stand up bass and ambient bowed guitar passages. I count myself very lucky to have caught such an impressive band, and though this was their first time on the West Coast, I hope the warm welcome we gave them will keep them coming back.

Finally, it was time for the main event: Ulcerate. This would be my first time catching these giants live, and if you read my praise of their new album, you could probably guess how ready I was to be blown apart on a molecular level by this ferocious band. Sure enough, taking to the stage with minimal fanfare, the trio proceeded to deliver some of the most devastating death metal I have ever been witness to. With a set list covering much more of their back catalog than I had anticipated, Ulcerate managed to showcase the high points of Shrines of Paralysis while also throwing in fan favorites, including playing the title track from Everything is Fire as an encore. For all the chaos that the band’s music contains, their entire performance was flawless; of particular note was the effortless and dazzling druming of J. Saint Merat, who played the band’s complex and frantic rhythms seemingly without breaking a sweat.

This tour is still ongoing and making its way across the country, and if it is available to you, I give you my strongest recommendation to check it out. I have not been that blown away by a group of bands, such as these, in a very long time.