Receiving the Evcharist is our weekly feature where we pair choice albums with our favorite libations.  Drink from the cup of heresy.  This week’s offering: Superstition’s Surging Throngs of Evil’s Might and Drake’s Brewing Company’s Black Robusto. 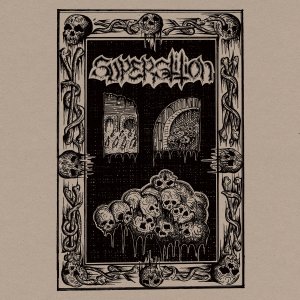 I sure as hell am kicking myself for not jumping on this album sooner.  Superstition’s debut release, Surging Throng of Evil’s Might, hit the undergound in January of this year and almost instantly became the talk of the town, at least in the circles I seem to run in.  I filed it away as one of those things I would get to “you know, at some point,” and almost forgot about it entirely.  That is, until I found out the demo was getting the official vinyl treatment from none other than 20 Buck Spin, premiere peddler of some of the best death metal in this day and age.  If XXBS and Co. signed off on this, then I knew I had no excuse for not checking this out already, and of course, I was instantly blown away on my first listen.  Surging Throngs packs a walloping punch of old-school death metal, replete with creepy, horror-tinged synth interludes, heavy with crypt-stench atmosphere, and with riffs for days.  I may be late to the party, but I’m glad I didn’t miss this one, and I’ll definitely not be missing this band when they come my way to support Spectral Voice. 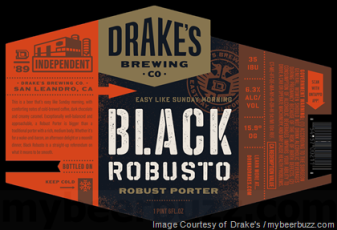 Remember when I said I thought that winter here was done?  Remember when anyone thought winter was over?  I guess we all got fooled, because the cool air is back here in So Cal.  Don’t get me wrong, this is a decisive victory for me, someone who abhors the warmer months (anything above 65 degrees is intolerable and I’ll gladly die on that hill), and it gives me an excuse to talk about as much more dark beer as I can.  Today, we’ve got Black Robusto, a delightful porter from our frequent contributor Drake’s Brewing Company.  The label promises it will be “easy drinking like Sunday morning” and there is a lot of truth to that statement.  Black Robusto certainly does go down smooth, and the distinct coffee flavor is reminiscent of my personal favorite morning ritual.  The rich body certainly earns it the “robusto” name as well.  Another one knocked out of the park from a brewery that can’t seem to stop impressing me.

Another one bites the dust.  Check back with us next week for more of the same awesomeness you know, and hopefully love.

One thought on “Receiving the Evcharist: Superstition and Drake’s Black Robusto”