If you’ve been following my ramblings here long enough, it’s a given that New York’s Netherlands are miles away from the norm which consequently makes them a shoe in for favorite status in my book. August 24 marks the release date of Netherland’s fifth effort, Black Gaia, on frontman Timo Ellis’ imprint Records and Tapes Records. It’s an album that pulls in all their legendary psychedelic freak outs, melodic poppy hooks, bottom heavy bombast and the knack for ridiculously catchy songwriting into a MOUNTAIN of a successful album.

The underlying theme of Black Gaia is a call to arms, so to speak, for averting the impending collapse of civilization due to a hunger for unending progress, among other things. Naturally, the perfect backdrop for this wildly experimental and explorative band to engage upon. As soon as I got a copy in my hands, I had to know more and Timo was a blast to talk to as we covered the upcoming album, surviving the cesspool and much more. Head immediately below to be a part of the chat and mark your calendars to be the first in line on August 24. 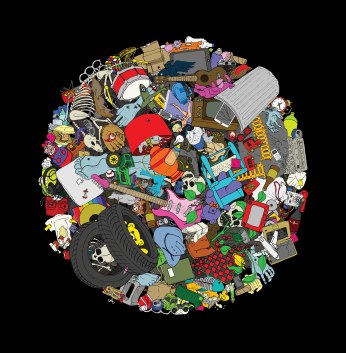 Many thanks to Timo for his time!

Black Gaia will be available August 24 on Records and Tapes Records. For more information on Netherlands, visit their official website and Facebook page.