When the debut self titled album by Sacramento’s Helion Prime arrived on the scene the first thing people were talking about was that cover.  And I get it: that thing is unabashed in its love and glory for over the top science fiction.  A lot of people couldn’t;t get past that cover, which is too bad because underneath was a killer power metal beast, blending modern and classic elements from both sides of the Atlantic.  A few years and a few vocalist changes later and the band is back, doubling down on robot dinosaurs with the awesomely titled and equally fun Terror of the Cybernetic Space Monster.  How could it not be our August Power Metal Album of the Month?

The biggest change coming out of the gate is the addition of new vocalist Sozos Michael, taking over from Kayla Dixon (Witch Mountain) who in turn succeeded Heather Michele Smith.  It’s an interesting choice moving to a male vocalist, but Michael’s range and control works really well with the songs, which here has tight, modern production with all the harmonies you would come to expect from the band.  This is immediately apparent on first full track “A King is Born” where the verses are harmonized (and singing about ancient reptiles so +100 nerd cool points) and lush without being overwrought.  Power is never set aside and the best tracks, like “Bury the Sun,” “Urth,” and “The Human Condition” feel at once expansive and succinct, killer solos and leads permeating each track to reinforce the more dramatic moments of each track.  On the production front things are nice and crips, with the guitars having a particularly sharp bite.

All of this fall together on the epic closing title track.  This is also where Michael truly shines, embodying multiple personas and a huge range as the narrative arcs into battle.  Founder and primary songwriter Jason Ashcroft shows he has an adept hand and crafting tightly woven songs of any length, and the seventeen minutes of “Terror of the Cybernetic Space Monster” has a heft and deftness of touch that doesn’t feel like a slag.  The act that Ashcroft and Michael are more than fully supported by the rest of the band is no small thing, as everything from drums to bass to the leads are vicious and best played at loud volume, as is the whole of this great album.

Terror of the Cybernetic Space Monster is available August 31 from AFM records.  For more information on Helion Prime check out their website and Facebook page.

Primal Fear – Apocalypse:  It’s safe to say Primal Fear is an institution at this point, and on album #12 the bans continues to rip faces off with their signature European speed/power attack, and the sooner you hear leadoff tack “New Rise” you’ll be wondering why this wasn’t my Power Metal Album of the Month.  It was close folks, so definitely give this a shot if you haven’t already.

Mob Rules – Beast Reborn:  The German power metallers approach their ninth albums much the same as all their others: there’s a consistency that borders a little too much on sameness for my tastes, but there’s no denying the chops and proficiency on display, whether its the anthemic “Ghost of a Chance” or the Iron Maiden-ish “Traveller of Time.” Definitely a solid album. 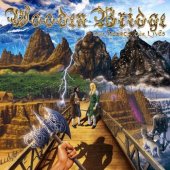 Wooden Bridge – Our Hearts, Our Lives:  The debut album from this Brazilian group came out of nowhere for me.  I saw the album cover and stifled a few giggles, but that changes when the music started.  This is a ridiculously fun blend of progressive, folk, and power metal.  I hesitate to use the word “delightful” because I don’t want to diminish how much fun the album is.  Check out “Run to Ror-Modin” and “Punished Land” and tell me what you think.

Until next time, keep it heavy, and let us know what we should be looking out for in September!