Episode 25! How the hell did we make 25 of these?! It boggles the mind, but not as much as the production choices on Gold & Grey, the latest from Savannah’s rocking sludge merchants Baroness and not coincidentally our Album of the Month selection for June 2019! 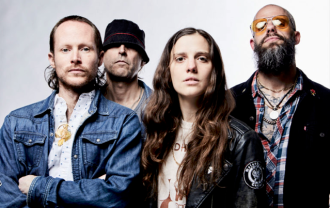 Buke has the pick this month, and he guides the rest of the crew, including Chris, Hera, Jon and Vincent through the highs and lows of his experience with the album, and much is made of the stunning addition of Gina Gleason to the fold…but dang can we talk about the production? In other news it’s also a chance for the gang to wax poetic on their favorite records from the first half of the year, so get your pencils sharpened because there’s been a ton of great music released. It’s the best kind of homework!

All that, and a brief crash course in the silliness of early Christian extreme metal. In other words, just another day for the Nine Circles Audio Thing!

So jump on in and enjoy the hijinks. Better yet, head over to your favorite streaming site and give Gold & Grey a listen too (or buy it even). Support your favorite music!

In the meantime, keep it heavy and we’ll see you next month!

Gold & Grey is available now from Abraxan Hymns.  For more information on Baroness check out their official website.

2 thoughts on “The Nine Circles Audio Thing: Baroness was June 2019’s Album of the Month!”