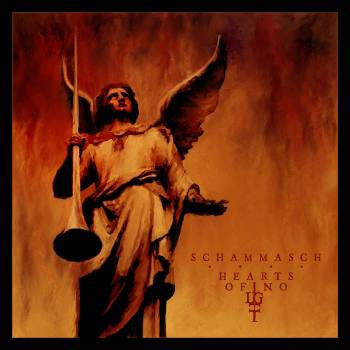 The question is immediate, wet and dripping on the lips of everyone familiar with the avant-garde black metal leanings of Schammasch: How do you follow up Triangle?  How do you find something else to say after delivering a critically acclaimed triple album that seemingly touched on every aspect of a genre, heady and expansive and mystical in its aural presentation?  The way out is through, as the man once said.  By simultaneously expanding their sound and distilling its essence, Hearts of No Light does in one album what Triangle did in three: explore dark avenues of philosophical yearning by way of even darker, brooding atmosphere and winding black metal roads.

In short, it’s a killer, a worthy and mesmerizing new offering from one of the best bands putting their stamp on the genre.

That Hearts of No Light is good should come as no surprise.  Since 2010’s Sic Lvceat Lvx (gloriously unpolished as that debut it) Schammasch has been championing a music that is at once bold and progressive even as it plumbs the depths of black metal’s foundations.  That sense of progression really reared its devil horns on 2014’s Contradiction.  Coming with the signing to Prosthetic came a real sonic upgrade and little in the way of compromise, as evidenced by that album’s massive closer “JHWH” and its ending rally of “Worship what you’ve burned / Burned what you’ve worship.”

But nothing on those records could prepare for the juggernaut that was Triangle, and moreso than any other record is where the Hearts of No Light find traces of musical symmetry.  Where the former album split its direction into three distinct sides, the new album beautifully stitches the different approaches both between and within the songs themselves.  But to call Hearts of No Light a condensed or bite-size version of Triangle is to do it a disservice.  Now expanded to a five-piece, there’s a larger, wider sound on display, even when things are fragile and stark, as on the opener “Winds That Pierce the Silence.”  Featuring haunting piano by Lillian Liu, the track gives the sense of an introduction before blowing out to a storm of foreboding metal.

From there the album moves in waves, cresting with the progressive churn of “Ego Sum Omega,” falling back into the ambient, almost current Ulver territory of “A Bridge Ablaze” and then roiling into a tsunami of frenzied metal with “Qadmon’s Heir” and the single “Rays Like Razors.”  The heavier tracks are obscenely heavy, effortlessly laying in thick cold of riffs and infernal rhythms, with “Qadmon’s Heir” being a standout of how Schammasch can reach blissed out moments of progression without sacrificing an ounce of aggression and darkness in their music.

Tracks like these and “I Burn For You” also demonstrate the band’s sharp sense of songwriting.  Rarely does any song fall into the “riff repeat” mechanism utilized by so many black metal bands.  Instead each song moves through sweeping arcs, never content to rest for too long on a particular musical idea, instead moving in unanticipated directions, as on the propulsive alt rock of “A Paradigm of Beauty,” which is something no one could ever have imagined associating with a band like Schammasch.  Then there’s the 15-minute synth laden mood exercise that is “Innermost, Lowermost Abyss.”  Rather than coming off as a toss-off jam or pieced together leftover, the song feels like an encapsulation of everything the band is trying to communicate in their music; it’s a meditation rather than a rager, and as a closer it feels like the end of the world.

At this point there’s nothing for Schammasch to prove, although I would suspect they never felt the need to prove anything.  But Hearts of No Light proves that some bands are good enough to take the myriad of ideas and style shifts in a triple album and distill it into something slightly more compact without losing that sense of epic scope and cosmic philosophical dread.

In other words, damn this is some album…

Hearts of No Light is available November 8 from Prosthetic Records.  For more information on Schammasch check out their Facebook page.

One thought on “Album Review: Schammasch – “Hearts of No Light””