I don’t think anyone expected the world to be where it was when 2020 kicked off.  To even attempt to put into words the surge of feelings around a global pandemic that refuses to go away, a wretched history of systemic racism, brutality, and ignorance being exposed and reckoned with in the streets all over the world, and everything else the first six months has brought to light is reckless and futile for me right now.  I continue to watch, listen, and learn as much as I can: to actively be part of a solution instead of passively being part of the problem.

In the moments between there is music, and if there’s even a glimmer of light right now, it’s in how good 2020 has been with regards to metal.  So let’s see where my penchant lies as we cross the halfway mark of year that feels like forever.

I haven’t been able to shake the primordial bludgeoning -(16)- have brought down with Dream Squasher since first hearing it.  Hitting that NOLA-inspired sludge with a unique flair of menace and intensity captured not only in the pummeling music but the harrowing lyrics on tracks like “Candy in Spanish” and the brutal “Me & The Dog Die Together” there’s not a throwaway moment to be found.  You can read my full review here, but for the real proof just check out that second half, where I’m finding that “Screw Unto Others” might now be my favorite song on the album.

It’s no secret I love it when a band changes direction and seeks its muse in a different fashion, so seeing Elder pop up on this list with their striking and hypnotic Omens shouldn’t be a surprise.  What may be a surprise is how much I love it despite being lukewarm at best regarding their previous full length Reflection of a Floating World.  Where that album felt meandering and hazy trying to bridge the warring side of their music, Omens feels focused and illuminating having completely given in to its proggier, progressive leanings.  Charles has a lot more to say about the album here, but I’ll add that the way the keyboards and clean vocals play so prominently into each song’s construction – from the epic journey of the opening title track to the joyous light of closer “One Light Retreating” make for one of the most rewarding, repayable listens of the year.

In 2007 my album of the year was The Red Album by Baroness.  The way that album hit me, with its fragile, post metal elements crashing against an ocean of southern sludge, doom, and anthemic rock was a galvanizing moment for me, bringing an emotional connection I wasn’t finding elsewhere.  Toward the Sun brought all those feelings back, from the lush clean vocals of “The New Sun” to the lumbering evil riff frenzy of “Light Bearer.”  Garganjua have crafted something that defies easy description, an album that weaves an emotional arc with me, forcing me to move, fall, and remember.  Out of everything on this list, this is the most “personal” album for me, unexplainable in the way it unlocks parts of me, parts that don’t require critique or justification.

I only just reviewed Eden in Reverse, the latest from German experimental black metal outfit Hail Spirit Noir a little over a week ago.  But I’ve been a slave to its machine psych prog attack ever since: this is an addicting record in the best of ways.  Taking inspiration from Neu! as much as Enslaved, you can still hear echoes of the progressive black metal that served as the foundation of the band’s sound, but tracks like “Incense Swirls” and “The First Ape on New Earth” show a band stretching far beyond what it did before to mesmerizing effect.

I really liked the way Inexorum took the tenets of melodic black metal and shaped it to unique ends when I reviewed debut Lore of the Lakes back in 2018.  So I was prepared to like Moonlit Navigation.  But what Carl Skildum (now partnered with Mathew Kirkwold) does on tracks like “Ouroboric State” and “Dream of Memory” is next level.  There’s a confidence to push out and get more anthemic, more fist raising rock and roll, and that call to arms permeates everything on the record.  When Vince covered it for this past week’s Evcharist I was jealous because I knew the second I heard Moonlit Navigation that this was something special; when you hear those harmonized leads, the clean vocal chants, and the hooks as large as a planet make their way into your brain you’ll understand why…

There’s been some great old school metal coming out from the veterans in 2020.  Testament came back big; Cirith Ungol rose from the ashes…hell, even Ozzy released a record (the less said about it the better).  But I keep coming back to Sepultura and the blitz attack that is album #15, Quadra. After putting out solid but unremarkable releases over the last 15 years, the band came alive with 2017’s Machine Messiah, and now with Quadra we have a Sepultura with the fire, hooks, and grandiose spirit of their early classics.  Derrick Green has never been more ferocious as a vocalist, and drummer Eloy Casagrande is a monster, bringing a vitality and brilliance to songs like “Isolation” and “Means to an End” that herald a new peak in the band’s career.  This album is pure fire, folks…don’t let anyone tell you different. 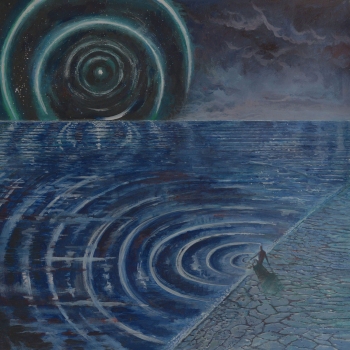 One of the albums I clung to at the start of Quarantine continues to enrapture me: Sweven, the Phoenix which rose from the ashes of Morbus Chron.  The Eternal Resonance winds its way through a very unique blend of Fates Warning, Death, and even Rush providing a striking musical achievement.  Highlights abound, but there’s still something epic about “By Virtue of a Promise” that enthralls me.  Launched with little fanfare, this is another album everyone needs to find in their collection.

I’m still having trouble describing what it is about Naiv, the ninth album from experimental outfit Thy Catafalque that appeals so much to my brain.  Certainly there’s the prog and psychedelic elements, but I think it’s more the way it mixes with an “otherness” to the structures and melodies that bring an aura of mystery; no matter how many times I listen to tracks like “A bolyongás ideje” and “Vető” there are new things to discover, new ideas to digest.  You can check out the full review from Ian here or, better yet, just let the music wash over you.

It feels like an entire story is being played out in the opening moments of “The Lifeless Advance,” the opening track from Stare Into Death And Be Still.  The latest from black/death juggernaut Ulcerate threatens to overwhelm anything else to come out this year.  Each track is layered with incredible moments, from the evolving drum patterns and rhythms that underline “Drawn Into the Next Void” to the myriad guitar lines that mutate over the course of the stellar title track, Stare Into Death and Be Still confounds even as it thrills.  This is a gigantic leap from anything else Ulcerate have laid down so far, and if the ravings from Charles and Vincent don’t convince you, the music itself will.

I could go on and on about the music that kept me sane this year; next week will be a follow-up of many of those records.  But for now I want to sit back, stay safe, think about how I can actively contribute to the solutions of the world instead of passively being a cause of it, and let the music wash over me when I need it.