It’s the last Tuesday of 2014 and I…don’t have any new albums to share with you. I know, I know, “welcome to December,” right? By now, you’ll all be well aware that Corey and I spent the better part of this month recapping our favorite metal albums of 2014 in a long, incoherent manner. (Hence the graphic you see at the top of this post) That was fun. I’m not sure I’ve done so much writing since my journalism days in college, but…gotta get back into gear somehow, right?

Anyway, with all that said, I did occasionally find time to listen to new non-metal albums in 2014, though Horns Up duties did force me to be a bit picky on that front. The following list (and accompanying Spotify playlist) highlights some of my favorites, and will be just that—a list. (Because I’m busy at the day job and because of the aforementioned load of writing I’ve already done for #Bestof14 and because shut up.) This one’s mine and mine alone—Corey? Listen to non-metal? Fat chance—so let’s jump right into it:

END_OF_DOCUMENT_TOKEN_TO_BE_REPLACED

Not one to miss out on another chance to share ‘The Best of 2014’, get excited to see a complete rundown of all the albums that made it into my Top 25 in a straightforward, easy to read list. That’s right. No reviews, no write-ups… just the list. Quick note, the Top 10 is ordered, the honorable mentions are not. So, without further delay, here they are…

Primordial – Where Greater Men Have Fallen

Winterfylleth – The Divination of Antiquity

Insomnium – Shadows of the Dying Sun

Agalloch – The Serpent & The Sphere

Allegaeon – Elements of the Infinite

Panopticon – Roads to the North

Mastodon – Once More ‘Round The Sun

Godflesh – A World Lit Only By Fire

Alraune – The Process of Self-Immolation

And there you have it! Everything we’ve talked about and reviewed over the past few weeks on both the blog and in our podcast is right here. Yes, I am aware this was promised to you yesterday. Unfortunately some lingering holiday obligations after work prevented me from getting this done yesterday evening. Deal with it. And on that note, I think, just maybe, 2014 is officially a wrap… 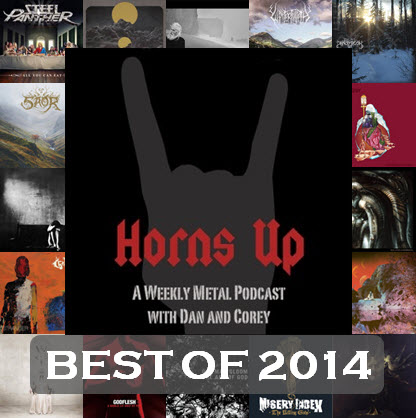 So remember a week ago, when I said we’d each be listing out our Top 25 albums in a single, coherent list? (You know, to make amends for the three-a-day-on-the-blog, plus three-three-and-then-four in our three most recent episodes of the podcast approach that we ended up going with?) Welp, with the holidays coming around, that became a bit of a tall order. But fear not, a week later, here are my Top 25 albums of 2014, listed out in a normal fashion!

Panopticon – Roads to the North

Agalloch – The Serpent and the Sphere

Allegaeon – Elements of the Infinite

Winterfylleth – The Divination of Antiquity

Alraune – The Process of Self Immolation

YOB – Clearing the Path to Ascend

Primordial – Where Greater Men Have Fallen

The Atlas Moth – The Old Believer

Godflesh – A World Lit Only By Fire

Steel Panther – All You Can Eat

I’m leaving to catch a bus, so I didn’t really have time to Spotify all of these. The good news is: I’m sorry! And also, we’ve embedded these playlists before. So if you haven’t heard any of these yet, for whatever reason, look ’em up in our archives and give ’em a spin. Corey will be back with his Top 25 list later today, so keep eyes peeled. Until then!

It’s Tuesday, but with today’s date being December 23, it’s a bit too late in the year for us to worry about new albums. Shocking, I know. Instead, for this week’s edition of Just the Tip, we’re going to take yet another look back at 2014. This week, Corey and I bring you our three favorite songs from our four favorite albums of the year. In all, it’s 12 songs each, because math–although as you’ll see, there’s some overlap. Check it out:

Got a couple of hours to kill? Give these a listen. Hopefully they’ll carry you over until our next ACTUAL edition of Just the Tip.

Friday at last! It’s time for the final installment of the un-ordered section of my Best-of-’14 list. As we’ve made (hopefully) painfully clear over the past few days, our Final Fours (otherwise known as the yes-ordered section of my Best-of-’14 list) will be out later this afternoon in Episode 33 of the podcast. And afterwards, I’ll probably follow up with a post just listing out our Top 25s in a normal fashion. Think of it as atonement of sorts.

Anyway, enough of all that–here are the last three randomly ordered non-Final Four entries from my Top 25 of 2014: