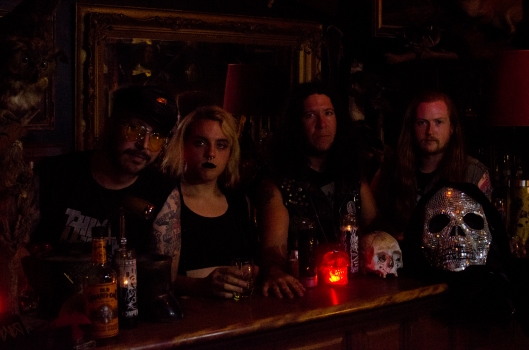 Hessian‘s 2014 debut Bachelor of Black Arts is a fist-pumpin’ ode to late 70s and early 80′ heavy metal classics that paid close attention to guitar driven theatrics as much as it did colorful lyrical content. On their upcoming second full length, Mercenary Retrograde, the spirits of Priest and Diamond Head are alive in the guitar harmonies and old school vocals. True, the band did well on their debut but now they’ve stripped away any of the chaff in their sound and focus solely on nailing a raw, straight forward attack. This equates to an album that rocks harder out of the gate and sets its hooks deeper. We recently had the chance to ask mastermind and guitarist / vocalist Angus McFarland our set of Profile questions to get some inside info on the band and what makes them tick. Head directly below for that and don’t forget to grab your own copy from the links contained at the bottom. END_OF_DOCUMENT_TOKEN_TO_BE_REPLACED

Disclosure: there were actually four bands on this particular bill. After a bit of a delay in getting into the venue, I missed most of Manic Abraxas. And since I had a drive ahead of me and was traveling with a party of people that were on varying levels of intoxication, I missed the headlining Hessian. So it goes. Regardless, this was a tremendously fun evening, and both Heavy Temple and Pilgrim were a big part of the reason why. END_OF_DOCUMENT_TOKEN_TO_BE_REPLACED

If I have been critical of Primitive Man for one thing throughout their short but impressive career, it’s been the amount of waste in their records. The band’s debut LP, Scorn, was loaded with what I considered excess noise, samples and prolonged feedback which severely affected the fluidity of the album. Their 2014 follow-up, P / / M, suffered from the same inability to edit, and included a 17-minute-plus song simply titled “Cum.” Following splits with Fister, Hexis, Xaphan and Hessian later that year, Primitive Man now return with a four-song, 31-minute EP entitled Home Is Where the Hatred Is to give their fans a view at what their future is. And in my opinion, that future is exceptionally repetitive.