The sun is out and I feel like nobody is getting any work done. Nice.

It seems like only yesterday we were saying goodbye to 2017 and ushering in a new calendar year. Some went to parties, others got drunk and puked at their local bar. Me — always trying to be different — I was sick at home and fell asleep before the ball dropped. We all had one thing in common; the anticipation of new metal tuneage. Now that we’re at the end of January, I can safely say that most of us are not disappointed thus far. Many blogs, especially this one, have highlighted and reviewed some terrific metal in January. Many of those blogs, however, left power metal out of the equation. That’s where I come in.

I’m gonna be honest, I’m not that great of a reviewer. So instead I decided I wanted to highlight a great power metal record from the past month. I’ve been called a power metal guru by many people so I’m quite confident to gush over an album knowing that others would like it as well. This lovable sub-genre gets verbally beaten up quite a bit and I don’t want to be a part of that. So, it’s all nice words from me. Okay, enough intro yapping from me. Time to reveal my favorite power metal album for January 2018! END_OF_DOCUMENT_TOKEN_TO_BE_REPLACED 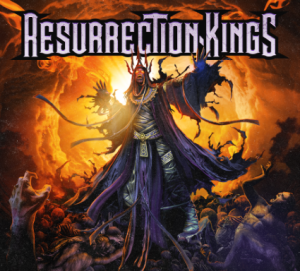 Born out of former members of Dio, The Jason Bonham Band, Dokken, and late-era Black Sabbath, CA-based Resurrection Kings take the stadium-ready songwriting approach of 80s hard rock and combine it with the shred solos of traditional heavy metal, and at times, the vibes of older blues-based rock. At first glance, Resurrection Kings reeks of needless nostalgia, but the album’s production gives it a modern edge that keeps it from sounding like Whitesnake sneaked out of the tomb. The band’s performance and time-tested resolve are what make the album enjoyable, even in its admittedly pompous approach.  END_OF_DOCUMENT_TOKEN_TO_BE_REPLACED