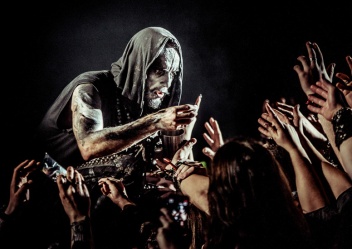 Receiving the Evcharist is our weekly feature where we pair choice albums with our favorite libations.  Drink from the cup of heresy.  This week’s offering: Mutilation Rites’ Chasm and Crooked Stave Artisan Beer Project’s Petit Sour Rosé.   END_OF_DOCUMENT_TOKEN_TO_BE_REPLACED

Kicking off another week, first thing, here on Initial Descent. None of you spoke up and said you hated the move to Monday so you’re stuck with it but I can’t think of a better way to get the momentum going than some new metal. Let’s do this.

First up is the fantastic debut, Seasons of Salt, from Khôrada which sees ex Agalloch and Giant Squid members unite to form a dark and challenging but beautiful piece of work. Mutilation Rites return with their fiery and filthy brand of black / death metal on Chasm, Future Cult sees The Lion’s Daughter mix extreme metal with 80s style slasherwave which equals a big score, and Wölfblood pull all the stops on their motorpunk, speed warped EP Nightriders which finally sees physical release so get on it.

There you have it, week is officially kicked off. Great openers but there’s many more to get into so stick around. We’ll be seeing you here throughout the week. END_OF_DOCUMENT_TOKEN_TO_BE_REPLACED

It feels like I went to sleep and the weekend is gone. Such is life. Anyway, tons of good stuff came out last week but then again there’s tons of good stuff out there period. Which brings us to today’s playlist of new, old and eclectic tunes to help get Monday underway. Along with a huge cup of coffee and this collection of tracks we’ll be busy for awhile and hope it helps you as well, even if by a little. Don’t forget to subscribe to our YouTube channel here and we’ll be seeing you around the horn throughout the week. 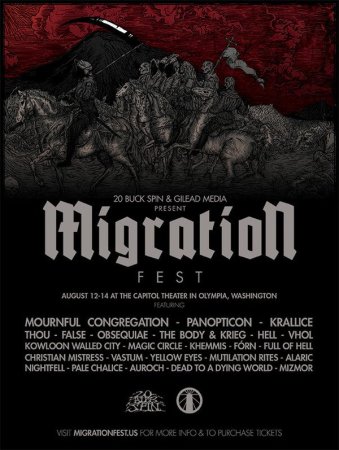 Alright, I think I’m finally done dragging my coverage of Migration Fest out. But can you really blame me? It was an incredible weekend in an incredible area of the country all centered around a collection of bands I just assumed I would never see live at any point in my life. Yet, Gilead Media and 20 Buck Spin made it happen. There’s no doubt that Saturday was the highlight day of this particular festival, and I’ll tell you right off the bat that nothing from Sunday bettered the performance of Panopticon the night before. But I would also be lying to you if I said Sunday wasn’t also anything short of amazing. While the festival was on the way out on the calendar, you would never know that from the performances. One more time… let’s take a closer look. END_OF_DOCUMENT_TOKEN_TO_BE_REPLACED

It’s time for Episode 15 of The Horns Up Podcast, your weekly catch-up on all things metal!

This week, Corey gets a Horns Up send-off ahead of his trip to Germany for Wacken Open Air 2014. Plus, the guys check out new albums from Overkill and Fallujah and discuss the huge news out of Indonesia–which just elected the world’s first-elected metalhead president!

All that and much, much more in this week’s episode, so check it out!