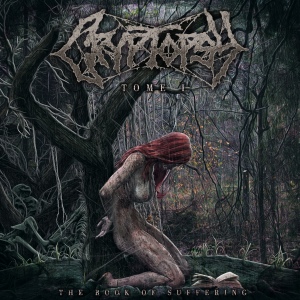 Cryptopsy has joined the ranks of metal bands experimenting with crowd funding and self-releasing their music. After a marginally successful crowd-funding campaign (they made a little over $9,000 of their $20,000 goal), the technical death metal outfit headed to the studio to record a four-song EP, The Book of Suffering: Tome I. Unfortunately, much like their crowd-funding experiment, the EP falls short of the mark.

In terms of style, Cryptopsy are firmly sticking to the same sound they had on 2012’s Cryptopsy. Think DiSalvo-era, but with a healthy heaping of modern tech death and deathcore blended in. The musicianship is competent. Flo Mounier excels (as he always has) at delivering spastic blast beats; Christian Donaldson’s riffing is impressively fast; Oliver Pinard’s bass playing is technical, at time jazzy, and perfectly audible in the mix; and, finally, Matt McGachy continues to hone his style to fit with the Cryptopsy sound, inching closer and closer to the unique style Lord Worm once brought to the band.

With all that said, you may be wondering what sort of standout moments appear on the album. Well, frankly, none. The whirling dervish of speed and riffs leaves something to be desired when it comes to impact. To be fair, Tome I has some cool moments, like the bass break on “Halothane Glow,” or the grooving breakdown toward the latter half of “Framed by Blood,” but they’re sparse. There is only so much blasting one band can pack into a song until it devolves into monotony, and that’s what happens on all four of this EP’s songs. They blur into a wall of triggered drums and spastic riffing, virtually indistinguishable from one another save for a few moments were a slam or groove is thrown in. You could swap the names and/or order of the tracks and I wouldn’t be able to tell.

Make no mistake, these songs will thrash you about, and leave you battered, but you’re not likely to remember them all that much. It’s a shame Book Of Suffering: Tome 1 isn’t something more substantial. Cryptopsy are on the threshold of the greatness they once had when Lord Worm was bellowing on albums like No So Vile, but there is something missing from the puzzle. Cryptopsy have retained the technicality and speed they’ve always been known for, and continue to redeem themselves after the disaster that was The Unspoken Kind. However, The Book of Suffering: Tome 1 suffers from what feels like over correcting. The band never pauses — whether rhythmically or compositionally — to affect any sort emotion or give weight to the music. At best, The Book of Suffering: Tome I seems 2012’s Cryptopsy part II; at its worst, it sounds like a collection of B-Sides.

Cryptosy’s EP experiment isn’t terrible. Fans who contributed to the crowd funding campaign will likely enjoy the output. But for everyone else, the EP simply falls short of its mark. Here’s to hoping future releases bring a little more creativity and variety.

The Book of Suffering: Tome I will be available 10.31.2015 via Bandcamp. For more information on Cryptopsy visit the band’s official website.