This Thursday evening went in a totally different direction than I had planned. My original plan was to drink red wine, listen to Bloodbath, and then take a bath… wait. Sorry. TAAKE ABBATH (see what I did there?) Before proceeding to write this piece in my inebriated (yet, relaxed) state. Instead, I got lazy, skipped the liquor store, and opted for a couple of local gems. Instead of Bloodbath, we’re talking DOOMBATH. Bath and doom metal! Except I never took a bath/Abbath. So we’re just talking doom. Confused yet? Me too. Doom metal! And awesome local doom metal. Coupled with some awesome local bourbon. The Metal: Morne’s Asylum. The Booze: Flag Hill’s Straight Bourbon Whiskey. 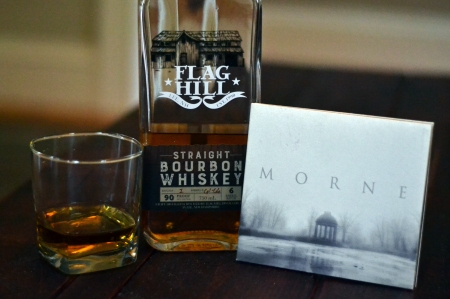 Maybe I’m being a bit of a homer here, but Morne is one of my favorite doom metal bands going. They formed in Boston back in 2005, and their last two full length releases are a couple of my favorites. Their latest effort in Shadows from 2013 might be their strongest effort, but overlooking the album that immediately preceded it would be a crime. From the ghost-white cover (also one of my favorites — it’s just so damn creepy) right down to the crunchy, punishing riffage that form this album’s backbone, it’s just a beast of a listen. And it’s incredibly gloomy and depressing. Even when melody becomes more of a focus in the piano phrases implemented in the closing passages of the title-track or “Edge Of The Sky”, and really throughout the entirety of the closing “Volition” with its female vocals and strings, the darkness is hard to escape. At over an hour though, it tests you patience, but it ends up being worth it in the end. Dreary and heavy, but still beautiful in its own haunting way, Asylum is right up there with the more important doom metal albums in my library.

I’ll be honest… I have no idea where this bottle came from. The distillery is located out in Lee, New Hampshire, no more than half an hour from here. But in hunting their website, this distillery doesn’t even produce a bourbon currently. There are hints that they will sometime in the future. But… yeah I’m confused. I didn’t buy it, I’m just enjoying it. And I must say, for a local bourbon that apparently doesn’t even fucking exist, it’s pretty solid. 90 proof, so it goes down quite easily. The flavor and body is a little thin for my liking, the flavors being on the lighter end. But it has a defined, classic spice to it and just a touch of sweetness on the finish. I’m drinking it neat, as I do everything because there’s obviously no place for melted ice in my alcohol. But honestly I don’t think I could drink it any other way. While chilling this may enhance some of the flavors going on, which lack a certain complexity, serving it on the rocks just doesn’t seem… right. Oh! Rocks! Whiskey stones! I just solved my own dilemma. I’ll try that next time. Anyway, if you ever get a chance to try this bourbon, which I’m guessing you never will, I’m sure you will enjoy it. I certainly haven’t regretted this decision.

Alright, I’ve still got three hours until I can head to Bull Moose to pick up my copy of Katatonia’s The Fall of Hearts. So… I guess I’m going to go watch more Better Call Saul and drink more bourbon? Sounds like a great idea. Later, people!

One thought on “Receiving the Evcharist: Morne and Flag Hill”