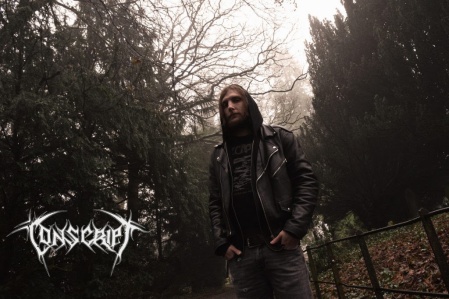 Conscript is a one man melodic death metal band from the UK and recently released their debut EP Celestial Mechanics which is three tracks of some truly amazing, high energy metal. While melodic death metal is a large piece of the puzzle the way thrash, brutal death and symphonic metal are incorporated makes this EP instantly engaging and throughly addictive. Each track blazes with fury, blast beats and jagged riffs abound but the melodic groove is always infectious. And that would have been enough to illicit hours spent with this on repeat but the symphonic aspect creates a monstrous effect, making these three short tracks open up and come to life. Needless to say this EP made an instant impression and we had to find out more from sole member and mastermind Joey Jaycock, see what he had to say after the jump.

Tell us the backstory of Conscript; how did you get started and what are some of the influences that made you forge ahead with the band and this style of metal?

It kind of started out two years ago, I wanted to start a band from the ground up exactly how I wanted it to look and sound. I tried playing the Conscript tunes with other musicians but I wasn’t able to find anyone on the same wavelength, and those who did, just wanted to change parts and meander greatly from the ideas I had in mind, so in the end I decided I could do a far better job by myself.

I love symphonic metal and also old school thrash, so I wanted to find some kind of middle ground between epic and brutal and Conscript was the end result.

You recently released your EP, Celestial Mechanics, which brings the best parts of melodic death metal, black metal and thrash together in a very catchy but brutal way. Was this the intent going into recording?

Yes, it was, you’ve named probably my three favourite metal sub-genres. I love old Children of Bodom,  Dimmu Borgir and modern metal bands like Sylosis, Heaven Shall Burn and The Agonist, so I tried my best to put them in a blender and see what came out the other end.

One thing that caught my ear was the use of synth on these tracks, particularly on “Atlantean”. It gives these three songs just a touch of the kind of epicness found in power metal and even traditional metal. Tell us the thought process behind incorporating synth.

I feel that in metal that the best uses of synth are on an organic, subtle level. I wanted to write music that wasn’t reliant on synths and effects and could be performed without backing tracks, but still threw in some cool melodies just to give it more space and variation. I had a rule of keeping it to strings, choir and piano to keep it controlled and sharp. I guess when we’re doing it live, it needs to be playable by a keyboardist too, which was another consideration. I love metal with a full orchestra, but I didn’t think it’d suit Conscript to have brass sections and percussion nor would I have any idea what I was doing in terms of composing something so complex.

Everyone approaches songwriting differently but with Conscript being a one man band everything falls on you. This EP is so densely packed I’m interested in your particular approach to writing and what goes into making it sound as great as it does.

Thank you! I basically like to come up with riffs and lay it down on my PC. From there, it’s a case of coming up with some cool drums with interesting fills and then other ideas for bass or synth seem to come about. I tend to create many iterations of the same song, eventually deciding on the best. I recorded the whole EP in my flat and sent it to a producer I found via YouTube (Death Culture Studios) who re-amped and mixed the whole thing professionally with my MIDI parts and guitar direct tracks, resulting in the big sounding mix. He fucking nailed it.

What is the basis for Celestial Mechanics? Is there a story behind the lyrics and album art or is it just what came out as the final product?

The art was a random idea that I had in my head for a while, it doesn’t really mean anything. It was drawn by an incredibly talented artist from New York City (Corinne Elyse) and I couldn’t be happier with how it represents the tracks.

The lyrics were slightly an afterthought but each have personal meanings, though not that deep. I probably worked hardest on the title track.

The harsh vocals work extremely well throughout this EP. A lot of bands that feature melodic stylings will forget about this detail and, at least for me, it’s an important detail that keeps the final product rooted in a sort of barbaric death metal sound and feel. In other words it has teeth and I couldn’t imagine it being any other way. What’s your thoughts on this?

Thanks for saying so! I’m not a vocalist at all so I’m glad you thought it worked! I had a particular sound in mind but had to adjust to my limitations. My good friend Pete Gardner at Styletone studios helped me push my limits and meticulously went over many takes with me  to make it sound huge, can’t thank him enough. I’m not a trained metal screamer and I can’t sing for shit, so there were times where my head felt like it was going to explode after yelling into the microphone, but I found my comfort zone and worked with it. It was a learning experience, so it’s a relief to hear a few people digging the vocal sounds!

I know the UK is bursting at the seams with great metal bands but what is the scene like where you are specifically? Is it loud and proud or are you the only one carrying the torch?

I’m from Northamptonshire and the scene is thriving. We’ve got some really cool bands from here. I’m really excited to see what Krysthla have in store this year, they’re set to make a huge impact on the national scene. We’ve had several bands from my town of Northampton winning a place at Bloodstock in recent years, so it’s definitely doing well around here. As for local bands similar in sound to Conscript? Not any I can really think of.

What’s your opinion on the state of metal at the moment (good and/or bad)? And how do you hope Conscript will fit in the current metal landscape?

It’s easier than ever to start a band, even if you are just one guy, you can put a metal CD out, as I have. There’s just not time to listen to every band, so you have to be ridiculously on top of your game to even stand a chance of being heard. I believe way too many bands focus on trying to be a cookie cutter model of a certain genre, resulting in a whole heap of shit out there that fades into the background. People who say metal is dying out just aren’t looking in the right places.

In terms of Conscript, I like to think there’s a market for what I’m doing, I hope to have some shred of originality somewhere. I never set out saying “Conscript is black metal” or “Conscript is death metal” or with any intention of looking or acting a certain way. I just try to write music that I’m happy with and that I’d enjoy stumbling across as a listener.

I know it was important to you to get something out by the end of 2016 so is this why Celestial Mechanics is only three tracks?

The main reason why it’s so short is because I suddenly got an offer to join my other band From Eden To Exile — honestly the most talented and most determined musicians I know — so I couldn’t turn it down in a million years. All my time was consumed by learning their songs as quickly as possible and I got immersed in the process. I had a few more half-baked songs, but I decided to save them for the inevitable full-length so I could put my all into them. I slightly regret only doing three tracks, but at the same time, I’ve had some really good feedback on them which pushes me to want to get another release out ASAP. The full length is going to crush it.

The EP is out on Bandcamp and most other streaming services but is there a physical version available? If so where can we find it?

At the time of writing there is not a physical, but it is in the works. Keep checking my website. I’m trying to figure out the best way to get it out there and still be profitable at this early stage. I’m in two other bands at the time of writing so the majority of my income goes into these other projects. We’re going to have some T-shirts shipping very soon, that’s for sure!

What’s next for Conscript? Please tell me there’s a full length planned?! Also, any upcoming tours?

Yes. 100% I’m dropping a full length! Three tracks is not even long enough to keep me entertained during my commute to work so I’m getting the full length written and recorded now I’ve settled into my other band. Since the EP dropped, I’ve had a lot of interest from musicians wanting to join and I have a full lineup just about sorted with some of the best musicians I know. In terms of touring, I’d probably be doing a few one off shows just to make sure we can play a show without anything fucking up and then the sky’s the limit. It’s my intention to be a full band by summer 2017 or sooner.

Thank you for taking the time to do this. Is there anything you’d like to add?

Yeah, thanks for coming up with these awesome questions, I had a really good time answering these. Keep checking my website and sign up to the mailing list for exciting new things. Huge shouts to my friends in bands from Northants and beyond! Cheers!

Many thanks to Joey for his time!

Celestial Mechanics is available now on Bandcamp. For more information on Conscript visit their official website.