Receiving the Evcharist is our weekly feature where we pair choice albums with our favorite libations.  Drink from the cup of heresy.  This week’s offering: A Congregation of Horns’ Goat Cult and Modern Times Brewing Company’s Black House.

The Metal: A Congregation of Horns’ Goat Cult

It was just the other day that I was having a conversation with some people over on Twitter about the lack of anti-fascist war metal bands out there.  I know personally, I love that gnarly, maniacal brand of blackened death metal, but it tends to attract the worst crowd the metal scene has to offer, and especially given the history of the political left, there could be any number of topics to draw from to turn the genre on its head.  Enter A Congregation of Horns, a project of Blackened Death Records’ own Pope Richard, whose brand new EP Goat Cult seeks to do just that.  Despite clocking in at just seven and a half minutes , Goat Cult packs more riffs per square inch than many albums do in five times the length; songs like the title track and album closer “Horns and Thorns” offer the kind of grinding, filthy metal I love alongside lyrics that subvert the traditional nebulously violent themes of war metal by making explicitly anti-Nazi statements.  A Congregation of Horns is panacea for the soul of someone tired of all the bigots in metal. 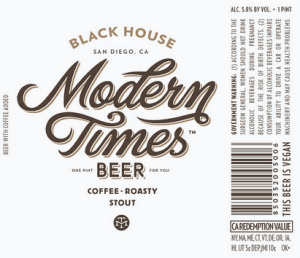 We’ve covered Modern Times Brewery plenty of times in this column, and for good reason.  While the more experimental beers they have are always done right, my favorite Modern Times beer, and indeed maybe one of my favorite beers period, is a simple stout, but one that is done right every step of the way.  Black House is an oatmeal stout brewed with Modern Times’ own coffee beans, which the brewery roasts in house to perfection (they’re one of the only breweries in the world to do so, according to the blurb on their cans), a plentiful blend of malts, and oats.  The coffee flavor is rich without being bitter, supported by the creamy texture and chocolate finish.  This, more than any other beer I’ve called as such, is my go-to beer.  I could drink this every day and never get sick of it.

So ends another week.  Celebrate the fact that you woke up breathing today; every day that happens is a good one.  I’ll catch you next week.  Until then,

One thought on “Receiving the Evcharist: A Congregation of Horns and Black House”