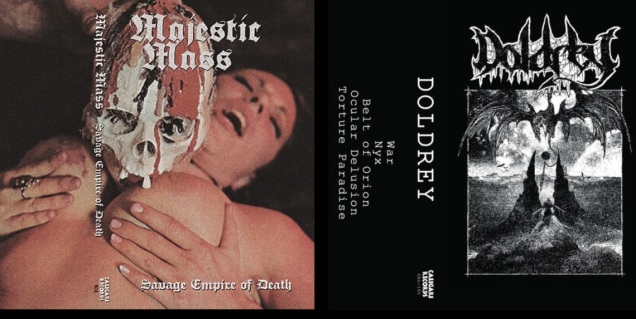 It’s been a hot minute since we sang the praises of Caligari Records but don’t mistake that for a lack of releases. The label continuously churns out some of the nastiest content from all corners of the metal spectrum and mostly on cassette which I adore. For this edition of Second Circle we’re taking a look at the blackened rock of Majestic Mass and the death punk of Doldrey.

Based on that album cover if you thought this would be another doldrum Electric Wizard attempt you wouldn’t be alone. I thought the same even though the promo materials for Savage Empire of Death said otherwise. And there’s not a lot of info out there on this Danish group either so nothing in that regard to change opinions. But, we all know what assuming does… Even though opener and mood setter “Triumphos Manifestum” oozes dark synth, the spoken manifesto that creeps up toward song’s end is puked out for all to hear and confirms this is in no way an EWiz clone (blessings do happen folks). “Clandestine Supremacy” hits the ground running with galloping drums and twisted noise rock levels of distortion. Then there’s the vocals that sound like Tribulation’s Johannes Andersson but only after a full regimen of razor gargling. And it’s here, early on, that we find out what Majestic Mass is all about: filthy, nasty rock that bathes in the blood of black metal and drinks from the chalice of death. “Sanguine Dreams of Lust” sounds like partying bikers kicking out death jams with Satan and “Those of the Night” revels in its late night channel X sleaze. If that’s not enough, the title track closes things out with an all guns blazing, lo-fi attack that pays stellar tribute to the days when rockers straddled the metal fence while the wailing echoed howls in the background are an exquisite touch.

Right there on Caligari’s Bandcamp page it says: ‘Majestic Mass is madness, it’s rock n’ roll. Pure fuck you rock…’ and this is dead on. Robert Johnson may have made a deal with the Devil but Majestic Mass invited him to the party and treated him to a rabid good time. Turn a cross upside down, slam back a fifth of bourbon and buy this thing already.

Second in this tale of two is the self titled EP from Singaporean death punks Doldrey. Over the course of five songs the band weaves a web of crusty punk and cavernous death metal that shares much with Swedeath, only filthier. It’s got boot to the jaw attitude on “Nyx” and deadly rhythm on “Torture Paradise.” But let’s back up a minute, opener “War” is an exclamatory affair that hits like Tyson back in his prime but sets the tone so damn well for the entire 12 minutes on display. Yep, you read that right, 12 minutes. And not one of them is wasted. Let’s not mince words here, Doldrey doesn’t rip off the 90s era of death / crust / punk for the sake of getting material out there. What they do is show an intense love for that era and bring it roaring back to life in their own way with memorable songwriting and massive enough chops to make it sting like an ice pick to the ear. I want to know more about this band but at the end of the day, who cares when the music is this good.

Doldrey is available now on Caligari Records. For more information on Doldrey, again good luck and again you can visit their Metallum page.

That wraps up this edition of Second Circle. Two outstanding new bands with two outstanding efforts, color me happy. Even in this internet age where information on literally everything is right at the fingertip, it still gives me a rush when bands unleash music with zero info to be found and you’re left with your own thoughts as to who they are and what drives them. It’s in these moments that said music has to speak for itself and both of these bands make it SING. Be sure to click the links above and get you some but also be sure to spend some time on Caligari Records website, there’s a treasure trove of mayhem to be found.

One thought on “Second Circle: Majestic Mass and Doldrey”