Our Second Circle albums all tend to share a common theme, be it genre, mood, or maybe they are being released by the same label, or even just released on the same day.  In today’s case, we hit two of these requirements simultaneously!  I am taking advantage of this format, to the shock and surprise of absolutely no one who knows me, to sing heaps of praise for two new releases dropping this Friday from my favorite record label, the one and only Gilead Media: Glacial Tomb‘s debut self-titled full-length and the second full-length album, Outer Supernal, from Pandiscordian Necrogenesis. 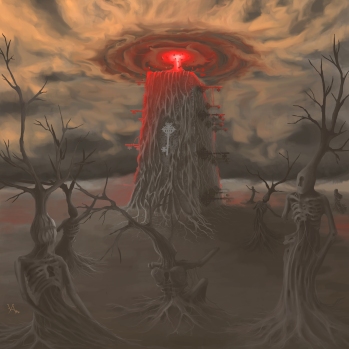 I have a friend who I have cultivated a bond with over our shared love of extreme metal.  Being the only two people in our friend circle that actively listen to more abrasive sounds, people often assume that what goes for one of us goes for the other, yet outside of a broad picture of our listening habits, we really couldn’t be more dissimilar.  My friend is very into technical death metal, symphonic metal, and generally things that are way over the top, and I keep telling him the same thing when he shows me bands: “This is cool, but I need it to be dumber.”  So when I call Glacial Tomb’s self-titled debut album one of the most ignorant slabs of extreme metal I’ve heard in a long time, I need you to know that this is a ringing, enthusiastic endorsement.  There’s no pretention to be found on Glacial Tomb, no overwrought technicality or melodrama; this is an album that is to-the-point in its execution.  Glacial Tomb distill the best parts of varying styles of heavy music, taking cues from black metal, death metal, hardcore, and leaning heavily on sludgy doom, with all the pieces fitting together to create an unrelentingly bleak and preposterously heavy whole.  And if his tenure in Khemmis didn’t make you a believer, guitarist Ben Hutcherson’s work here shows that this dude knows how to write a goddamn melody. 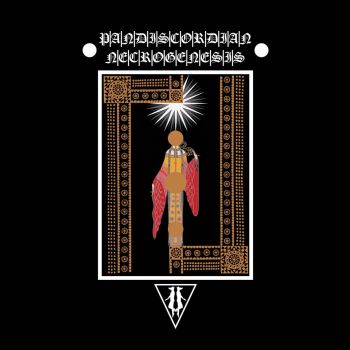 Improvisation is scary.  It’s the reason I always feel more comfortable playing in a rhythm position when I pick up an instrument; having to put that spotlight on myself when it came time for a solo made me freeze up.  The idea of taking improvisation to its limits, writing whole songs on the fly and no matter what happens putting it down to tape is an actual nightmare of mine, but Pandiscordian Necrogenesis make it seem as easy as breathing.  One of the many projects of Ephemeral Domignostika, whose distinctive voice you may remember from Pale Chalice, Mastery, Ulthar, or the “lifestyle music for all the cyborg assassins out there” of Apprentice Destroyer, Pandiscordian Necrogenesis is a project guided by singular, pure intuition; one man plays guitar, drums, and performs vocals simultaneously, with no advance songwriting, no overdubs, and no studio tricks.  The result is Outer Supernal, a work that pulls from Domignostika’s clear interest in first and second wave black metal and doom metal, with occasional ventures into dungeon-adjacent synth via the albums three interlude tracks.  The tracks found here tend to explore one or two ideas, playing with repetition and stretching out motifs just before their breaking point to create hypnotizing, alien-sounding black metal.  I will admit that when I first heard about this project, it seemed to me like a gimmick, and in the hands of a lesser musician a premise this lofty would have crumbled sooner rather than later, but Domignostika clearly has the chops and self-assuredness to pull this off; Outer Supernal made me a believer from minute one, and I hope one day to be able to trust my own musical vision this much.

Albums like Glacial Tomb and Outer Supernal remind me just why I enthusiastically support Gilead Media the way that I do: no other label has this kind of commitment to releasing honest music across genre spectrums the way they do.  This is a huge week for the label, and I guarantee the best is still yet to come.