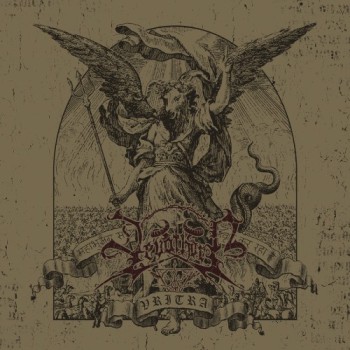 “They came from the blackness.” The infamous line from 300 was the first thing that entered my mind as I worked through the latest Devathorn release, Vritra. Having previously released only a single full-length (eight years ago) and two split releases since their 2002 inception, the band have finally returned with their second full-length effort. With it, the Athens black metal crew have created a sound as powerfully evil as the serpent the album is named after.

From the outset of “Veritas Universalis,” we’re made aware that Devathorn intend to abuse us with a punishingly relentless display of rhythms and some overall solid riffage, albeit a touch generic for the genre. Regardless, thanks to some impressive production, complete with just the right level of imperfection, every note holds some serious weight, which all wears down its listener track by track. But in a way, that’s appreciated. Furthermore, the hollow, guttural barks only add to the heavy burden of this listen. This ends up serving as the backbone to the entirety of Vritra—an incredibly abusive form of black metal on all levels.

Although the album’s foundation is its sheer strength, that doesn’t come at the expense of the actual quality of the musicianship. Simply put, we shouldn’t lose track or take away from some the technical ability on display here. Devathorn work in a number of guitar leads, solos, and time changes that will catch the attention of fans of even the most technical of death metal. You don’t need to look much further than “Doctrina Fide” or “Promethean Descent” to understand what I’m getting at. It’s this quality that keeps Devathorn’s sound fresh and interesting despite the longer track lengths that Vritra boasts. This same instrumental competence is on display on virtually every track on this album—which, combined with the aforementioned heavy crux, makes for one deeply penetrating listen.

But I think what catches me the most over the course of this hour-plus listen is how it maintains an unmistakable level of darkness and foreboding throughout. Looking at “Cantibus Ad Messorem, Sanctum Mors”—the instrumental break in the action—as well as the early stages of “Ars Diaboli,” “The Venomous Advent,” and the majority of “Sapphires of Vritra,” we’re taken on a horrific descent into untold darkness. This is all enhanced by the occasional choir or even spoken vocals, a deliberate cadence, and some absolutely piercing guitar leads. It’s a really nice demonic touch that prevents the album from being mistakenly perceived as simplistically burdening. Furthermore, it’s this added progressiveness that brings Devathorn’s pursuit of various black metal influences full circle.

All told, Vritra is one of the more impressive albums I’ve checked out so far in 2015. It’s a relentless display of brutality and darkness that will surely appeal to a diverse black and death metal fan base. While perhaps not pushing any limits in any one direction, Devathorn manage to create a cohesive, captivating sound that is as emotional as it is impressive. They fully embrace their sound and manage to construct an album that very well may force its way into year-end discussion. We shall see.