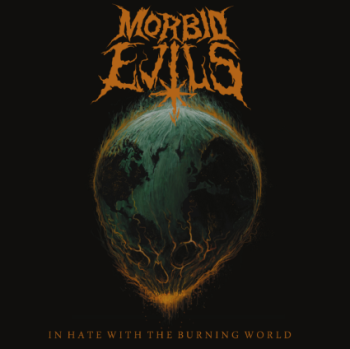 It seems like everywhere I turn there’s another doom, stoner or sludge metal band popping up. I admit it’s not always a genre that I find enticing; in my opinion, a lot of these bands sound so monotonous it makes the whole genre feel like a fad. Part of me, a very sick part, hopes that most of them would be swallowed as brine by the great humpback whale of time. But sometimes, there is a band—I won’t say a band of heroes, because what’s a hero?—but sometimes, there is a band that is perfect for their time and genre. Morbid Evils‘ debut album, In Hate with the Burning World is, for me, that album that stands out droning on above the seepage.

I swear there’s something in the water in Finland—no matter what genre you’re looking at, a Finnish band will usually sit atop the rankings. Now, with the addition of Morbid Evils to the pantheon of Finnish metal-bangers, Finland has a firm foot in the door of death-metal-influenced sludge/doom metal.  This is clearly not your run-of-the-mill sludge band; they do not play this style for lack of drive or talent—a point that is clear on In Hate with the Burning World.

As far as song length (always an issue with this genre), Morbid Evils tends to keep things around seven minutes, with the shortest track clocking in at just under five and the longest a touch over ten. The tracks are monotonous, as all forms of doom tend to be, but they are never boring or excessive. The stannic drumming and unrelenting pounding of the guitars effectuate a trance-like drone that bleeds from song to song with minimal interruption and hesitancy.

If vocalists Tero Nordlund and Keijo Niinimaa swap lead vocals on this record I surely can’t tell. It’s characteristic of the consistency that Morbid Evils shows across their debut. Usually, when listening to a band’s debut, you might expect them to sound immature and scatter-brained, with interests from all members permeating and making it seem like more of a track-to-track production than a cohesive album. Morbid Evils does not suffer this fate; they are a band that absolutely knows who they are, set out with a vision and do not rest until that vision is attained.

Overall, this is a work in completum—not to be broken up into single tracks. “Crippled” is nothing without the thematic upstart of the opener, “Cruel,” and so on for each song on the album. Even as “Crippled” fades out and “In Hate” opens with a muted bass riff, the album maintains its integrity and consistency. If there is a climax, it occurs during the fourth-track, “Pollute,” where both the guitars and the vocals climb in intensity and the rhythm almost picks up before the extended dissolve into the semi-title track, “Burning World.”

Despite the grimy, soiled sound of the production, you can tell a lot of care was put into this thing. When you hear the filthy sounds of Morbid Evils, know that this was all planned and perfected. Their sound is unique in a sea of similarities—this is a band you can instantly recognize, despite the inherent over saturation of their genre.

In Hate with the Burning World is available on Svart Records.  For more information on Morbid Evils, visit the band’s Facebook page.

One thought on “Album Review: Morbid Evils – “In Hate with the Burning World””