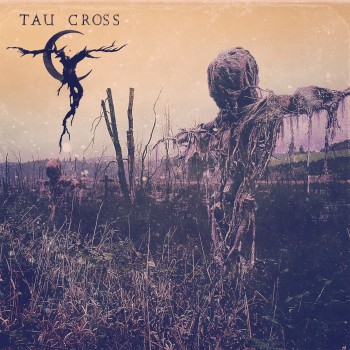 Tau Cross—comprised of Rob “The Baron” Miller from Amebix; Jon Misery from Misery; Away from Voivod; and Andy Lefton of War//Plague—is a must listen for crust, punk and metal fans. Go ahead and keep those expectations high because this is a supergroup that delivers. The band’s new, self-titled debut is an absolute clinic on how to write a diverse album full of catchy riffage, never-repetitive styles and stunning vocals.

Tau Cross has it all. “Lazarus” sets the tone with an homage to the experimental crust/metal of Amebix, while “The Devil Knows his Own” provides a moody, yearning ending. If you want classic rock-inspired crust power-ballads, you’ve got “Sons of the Soil.” Looking for some heavy metal? You’ve got “Hangmans Hyll.” Heck, you can even join your buddies at the watering hole for “Prison” and the eclectic “Our Day” for some singalong, group-hug inspiring tracks.

Miller’s voice has depth, anxiety and fury, but also tone and pitch. It’s unavoidable that Miller’s vocals will be compared to his countrymen Lemmy and Jaz Coleman. But Miller has another level; on “Hangmans Hyll” and “Sons of the Soil” he tones down the gruffness and sings with remarkable sustain, which results in a more powerful emotional feeling. Complimenting that voice is a perfect blend of driving, crunchy, punk-fueled guitars and tension-infused drumming—the culmination of which makes an entirely listenable album for fans of many types of loud music.

In some ways, Tau Cross continues along the path laid by Amebix’s Sonic Mass, while taking a leap towards power metal and thrash  (perhaps paying homage to those bands inspired by Amebix). But it’s not solely Miller that makes Tau Cross such a perfect record; it’s the blend of influences and styles that provides not just experimentation, but also cohesion. Tau Cross effortlessly blends influences to create something uniquely original, yet familiar—familiarity stemming from Tau Cross’ undeniable roots in American rock and roll.

I’m an enthusiastic guy. And since I get a lot of leeway when selecting what I review, I’m never lacking for outlets for that enthusiasm. So you may see me praising a lot of albums and ask, “why is this album different from all others?” Well, it’s not. Much like other highlights from this year, it has great songwriting, execution, production and artwork. It’s another “age-appropriate” album that old-timers like me will swoon over, yet is still fitting for ‘bangers of all ages. It’s actually quite a fun album despite being crusty, punky, full of metal and plenty evil. But there is just something about it—some infectious intangible—that makes me fall deeply and darkly in love with this one, that makes me want to listen to it over and over and over.