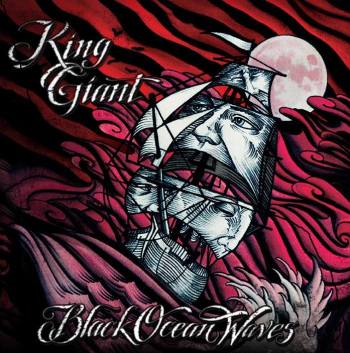 Three years after taking us down a dark, dismal hollow, King Giant are back with their third full length, Black Ocean Waves. For those unfamiliar, the band delivers a southern metal sound somewhere between Dixie Witch and Pepper-Keenan-era Corrosion of Conformity. While the band’s previous output fell toward the heavier end of the spectrum, album number three eases up a bit, and instead focuses more, unfortunately, on creating an accessible sound.

Indeed, on your first couple spins, that more accessible sound might come across as a bit of a detriment. Here you are, expecting an expansion of the absolute molasses of their back catalog, and this album simply doesn’t do it. After a bit of time, it’ll find ways to grow on you a bit, but it still gives off the same feel—that you could probably hear most of these tracks on the local rock radio channel that you never listen to anyway.

To their credit, though, the band is darker and better structured lyrically than we’ve seen them before. Take for example “Requiem for a Drunkard,” which describes addiction’s grasp on humanity and the spiraling aftermath of it all. (For what it’s worth, the song’s also one of the few quality, riff-driven rockers on the album.) Then there’s “Red Skies,” an intriguing tale of murder and dismemberment on the open seas, but one—unfortunately—set to a somewhat boring musical backdrop.

The captivating instrumental opener “Mal de Mer” is a highlight as well. The drums and guitars slowly build over a plodding bass line, hitting a crescendo near the end with some memorable crunchy riffing. All told, I would have loved to hear the album expand on this thing a bit more—particularly since the vocals leave a bit to be desired. It’s all too easy to take in a good…half or so…of this album and think you’ve just been listening to a so-so opening act at a local venue. “Trail of Thorns,” “The Gentleman Carny”…there are far too many examples of songs with decent sonic foundations who end up DOA thanks to their vocals.

I’m not giving up on this album, as it’s got some good things going for it—things that have helped me warm to it over time. But I’m still not sure if I’ll be able to get past those vocals. Oh well, we’ll always have that killer instrumental.