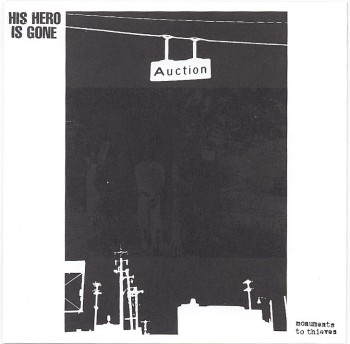 His Hero is Gone opens their 1997 masterpiece, Monuments to Thieves, with a damning, near-violent opening line: “Statues built for bastards / Monuments to thieves.” The album was a virulent, abrasive attack on America’s expansive poverty, crippling infrastructure, poor education and lack of universal medical care. The band’s foundational and fundamental influence on crust punk and crust-influenced metal is evident today across the globe (demonstrated heavily in Japanese punk). His Hero is Gone may no longer play shows but their vitriol and angst can still be felt as fresh as new on Monuments to Thieves.

Their rein on the crust punk scene was short—a mere four years. Forming in 1995 in Memphis, His Hero is Gone put out music that was damning of the system while progressive for the music scene. Its five core members—Todd Burdette, Carl Auge, Paul Burdette, Yannick Lorrain and Pat Davis—were also involved with bands like Tragedy, Nightfell, Severed Head of State, Union of Uranus, Deathreat, Warcry, Man with Gun Lives Here, FaceDown, Copout, Criminal Damage, Sob Story, Dimlaia, Call the Police and Drain the Sky. Not a shabby list to say the least. Despite disbanding in 1999, His Hero is Gone has lived on as a mainstay of the crust genre, with their albums still as relevant today as they were in the ’90s. The band laid the ground work for much of the crust/metal crossover that was to follow.

Monuments to Thieves was the second of three LPs over their brief career, following Fifteen Counts of Arson (1996) and preceding The Plot Sickens (1998). While all three of those LP’s are fantastic works, it’s Monument to Thieves that stands out as the truly brilliant work of the band’s career. The album preached individuality, freedom and the importance of self-reliance. Beyond preaching, the band had an attitude of self-reliance without PR or any internet presence, they still managed to spread like wildfire throughout the global crust scene and the American metal scene.

Containing three quarters of fellow crust legends Tragedy, His Hero is Gone took a similar approach to marketing and promotion: none. The band has lived on via word of mouth, t-shirts and patches screened in basements and re-pressings of their vinyl (originally released on Prank Records). Aside from the beer that they purchased, His Hero is Gone backed their vehement anti-consumer stances. Playing basement shows, squats and VFW’s, His Hero is Gone rarely played places that charged more than a five dollar entry fee. As a result, most of the shows they played were all-ages, which helped fuel their rise to importance.

Musically, the band employed characteristically thick, driving guitars (bass included) as well as an energetic and anxiety filled drum sound. Whether on the more spastic, fast tracks like “Carry On” or “Sin & Vice” or the slower, more pragmatic songs like “Chain of Command” or “Under Watchful Eyes,” the anxiety level and tension level remain high. In fact, their sound was and is very similar to early Tragedy, but more direct and angry with shorter songs. The urgency in their writing is immediately evident as the album opens with “Like Weeds.” A brief refrain spills over into what is one of the angrier, more driving tracks ever assembled in crust punk history. But that energy never dies down for the entire twenty-five minutes of run time. Each song is a brick in the foundation of their startlingly harsh message.

Another unique aspect of their music was the interplay of the guitars. Rather than have both guitars bang out the same chords, His Hero is Gone added some interplay including higher, buzzing guitar sounds reminiscent of a swarm of bees—only adding to the tension and anxiety in their music. Monuments to Thieves is, as all great crust punk should be, emotionally gripping. The listener is part of the struggle, part of the fight for a better tomorrow and part of the surge of energy. It’s yet another layer of interplay employed by His Hero is Gone.

His Hero is Gone will forever be one of the most influential and important crust bands of all time. When all is said and done, and the dust settles, those five men will be standing for what they believe in, against the powers that be. Dedicated not only in craft but in lifestyle, His Hero is Gone provides a full experience and a full education. Never is their lifestyle more apparent than on Monuments to Thieves.

2 thoughts on “Retrospective: His Hero is Gone – “Monuments to Thieves””