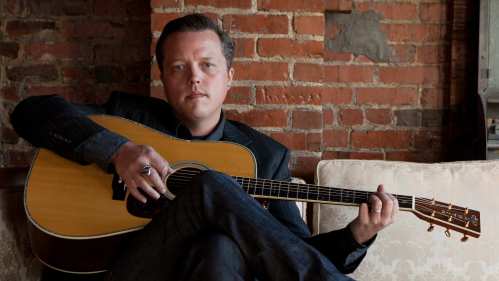 We talk about plenty of metal here at Nine Circles, but we also enjoy music from other genres. “Rainbows in the Dark” is our outlet to explore those other types of sounds and share them with you.

Alabama native Jason Isbell returned with his fifth full-length solo album, Something More Than Free, earlier this month. I’ve been a fan of Isbell for many years, thanks to his work with the Drive By Truckers, various Muscle Shoals session players, and earlier solo tracks like “Decoration Day” and “Goddamned Lonely Love.” While the new album doesn’t quite hit the same peaks as Isbell’s last effort—2013’s Southeastern—it does have its moments. So I’ve decided to focus this Rainbows in the Dark post on one of them, the closer “To a Band That I Loved.”

Always an immaculate story teller and subsequent vocalist, Isbell showcases his abilities on both fronts with this track, and aligns perfectly with the darker mood of his last outing. The song paints a colorful picture of the times he spent sitting in with one of his biggest influences, Centro-Matic, during lulls between Drive By Truckers tours. Musically, it’s a slow-paced, mostly acoustic jaunt, with occasional touches of garage band-esque fuzz and vocals that are accentuated with eerie echoes.

Southeastern saw Isbell emerging from a long battle with alcoholism, which he alluded to throughout the album without ever directly mentioning. As such, it was a more somber—and for me, more appealing—journey. This time out, he’s in a better place and the songs and stories generally reflect that. But for fans of that darker side, like me, it’s nice to hear a song like “To a Band That I loved,” which sonically falls somewhere between Southeastern highlights “Cover Me Up” and “Elephant.” To me, he’s just at his best when he sounds dark and brooding.

That being said, I’ve been a fan of Isbell dating back to his days with the Drive By Truckers, and his solo work has yet to really disappoint. Take a listen below, then dive into some of his back catalogue. You might just become a fan, too.