Hard to believe this month marks the 41st anniversary of Judas Priest’s full length debut Rocka Rolla,  as such, now is a good time for a Retrospective. At this point in the band’s career they were, for the most part, unknowns and when this album hit shelves it barely eclipsed a few thousand units. Traces of the almighty Priest, as we know them now, can be heard but overall this album falls in line with the likes of Thin Lizzy’s good time rock and Deep Purple’s heft. Unbeknownst to anyone at the time, this album would be among a handful that ushered in the New Wave Of British Heavy Metal (NWOBHM) and would kick-start the career of a legendary metal band.

Rocka Rolla was released on Gull Records with the infamous coke bottle cap cover. However, eventually the cover was changed with a later reissue. Even though the original cover art was not 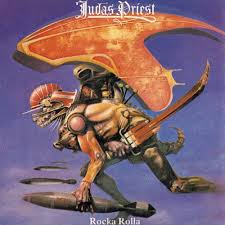 as tough looking as the reissue version, I’ve always preferred it. According to any account of the album available, including the band’s, it was recorded totally live in the studio. Evidence of this is apparent in the suite of “Winter/Deep Freeze/Winter Retreat/Cheater,” as these four tracks, originally separate tracks, sound the closest to a jam session featuring slow bluesy riffs, thundering bass lines, and stylistic shifts. “Winter Retreat” comes across as one of Black Sabbath’s emotional interludes while “Cheater” is a rocker from start to finish with Rob Halford turning in one of the finest vocal deliveries of the album.

“Run Of The Mill” and “Dying To Meet You” are the slowest tracks but still show a depth that would be heard many times over the band’s career. Even though ballads have never been their strong suit, the latter track has a number of stellar guitar passages and rumbling bass lines that fit the British heavy metal mold. Meanwhile, the former track relies on a more easy going rock feel. Finally,  advancing to the album closer, “Caviar and Meths,” follows this same formula. Originally intended as a 14 minute epic, the track was cut for fear of its length to only two minutes, sadly turning it into a simple outro. It would have been nice to hear the full track as intended.

My two favorites of the album are the openers “One For The Road” and the title track. The sum of the two are the heaviest of the album — hard driving rock with a steamy blues feel. These are the glaring foundation of what was to follow for the band and to this day are among my all time favorite tracks. “One For The Road” relies on a driving drum-guitar riff that evolves into an open air biker anthem as the minutes tick away. Meanwhile, the title track gets going with a meaty and bouncy riff that is more upbeat than any other offering here. The chorus is instantly catchy and speaks to the classic rock of their contemporaries of the time… Three minutes worth of good time and good feeling rock and roll, just as the title suggests.

Rocka Rolla was not my intro to the band but once I got into albums like Hell Bent For Leather and Screaming For Vengeance it didn’t take long to dig up their origins and find this gem. While their follow up album, Sad Wings Of Destiny, would all but seal their destiny and forge their direction in traditional heavy metal, this debut is a strong outing that to this day holds up as well as the first time I heard it. I hold it in as high of regard as any of their legendary albums and return to it on a frequent basis. With all that said, take a few minutes and spin this phenomenal debut below and hear the foundation the band was built on.