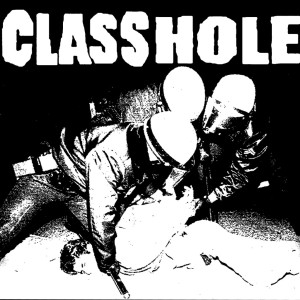 Ah. The heady days of punk and hardcore. The days of skateboards flying through abandoned pools. Throwing your neighbors lawn furniture off the roof. Drinking whatever you can get your hands on and tearing through the neighborhood smashing mailboxes and doing whatever you can to disrupt the system. Classhole are an absolute throwback to the era vomitous vocals, skateboarding and generally fucking up the system for all it’s worth. Their self-titled, debut LP is an absolute blast. Think of it as 2016’s Violent Reaction; a throwback punk/hardcore album put together by guys with nothing to prove. Merely a bunch of dudes looking for a way to channel their anger and get some circle pits going.

The self-titled debut by New Orleans based punk/hardcore thrash addicts include members hailing from such acts as Eyehategod, Hawg Jaw, Outlaw Order, The Mystick Krewe Of Clearlight, Mountain Of Wizard, Mangina, Tirefire, haarp and more. It’s not a lightweight group of untalented teenagers trying to pretend they were born in the late 1970’s with all the angst of suburban youth shoving safety pins through their ears. They recorded the album the only way possible for a band with this much angst and two step: live. Thus, the fury and anger contained within is on full display as the band reveals a forward moving cohesion that fully supports their talent and vision.

Class hole are endlessly fun. Their curse-laden lyrics attack the system, threaten cops and attempt to unite like-minded punks into anger fueled revolution. Gems like “Burning Pain” are near hardcore/punk anthems bordering on British skins influence. Further, tracks like “Times Up” and “Shut You Down” have slower, near breakdown style hardcore influences that provide the perfect background for a pit stomping party.

With fifteen tracks of angry, fast-paced punk laced with old school hardcore breakdowns, expect to be enraged and caught up in the excitement. There is no poetry, no pomp and certainly no circumstance. Merely and album of raw anthems replete with sing-along aspects and curb stomping brutality. The revolution is now and the soundtrack to the black bandana faced throwing of molotov cocktails will be Classhole. Thus, appropriately, the CD release will be in an eco-friendly digipak. So, dig out those combat boots and Carhartts, cover your face with a black flag and get ready to “take your fucking shot.”