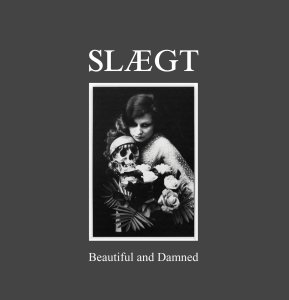 There were hints on Slaegt‘s only full-length to date, Ildsvanger, that the band was at least influenced by more traditional heavy metal. But their haunting and chaotic brand of black metal was certainly at the forefront of that 2015 release. Then, right on the heals of that release, the band doubled in size and dropped Beautiful and Damned, a complete tectonic shift in their sound. Now shoving traditional metal to the front, Slaegt has developed a sort of blackened epic metal that is both enticing and intoxicating. It’s a welcomed change that, along with a more arduous touring schedule, should help the Copenhagen artists blossom into a more recognizable and powerful band.

The shift is immediately noticeable as Slaegt explodes out of the gate with rolling double bass on “Move in Chaos.” First, there’s the frolicking feel to the pace. Second, there’s the recording style. The grimy, tinny black metal style that they had before is gone. It’s been replaced by a full, professional sounding production. The vocals are clear, in English and more assertive than before. The feeling is more of a triumphant departure for war rather than their prior aura of lonely death on a hillside. There’s even an acoustic, renaissance style track (“Church of the Night”).

The change in sound is beyond exciting. I must say, I was immediately taken aback hearing Beautiful and Damned. Not only was the sound so unexpected to the extent that I had to check the band name again, it was absolutely powerful. The sort of epic metal that drags the listener directly into the plotline of the track. And their lyrical and thematic shift is easily as dramatic as their musical pivot. Gone are the lonely, angry lyrics. Replaced by kingly pronouncements and vows of destruction. The new Slaegt is a genuinely fun experience.

Hopefully, this is the direction Slaegt chooses to pursue in the future. Their new lineup and new sound are a brilliant foundation upon which to build a formidable career. From crusty blackness to harmonizing guitars over wide open drum beats, the band has launched itself out of the catacombs and into the iron armor wearing castles of epic metal. Yet, despite the change, the band has retained enough of its, albeit brief, roots to provide an added layer of darkness to their now more traditional brand of heavy metal. It’s an exciting work that is definitely worth many spins and fist pumps.

Beautiful and Damned will be available 1.22.2016 via Iron Bonehead. For more information on Slaegt check out their Facebook page.