Local Cult, “The Church of Burning Lakes in Heaven” plans to honor neighborhood folklore this weekend with a festival, the culmination of which is to be a mass sacrifice.

“It all began as a bit of a joke,” said Cult Minister of Sacrifice Procurement, Wayne Harbinger. “When we learned in elementary school about the witch burnings and other occult happenings in the town, we thought it was just gossip.” That was, until they met Cult Leader Francis VVilderhamner, Supreme Minister of Blade Wielding. “Francis really tied it all together and made us believe that this actually happened. More importantly, we could not only communicate with but resurrect those unfortunate souls,” Harbinger articulated. 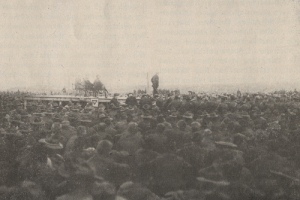 The Cult is planning the mass sacrifice on the site where it believes the majority of the witch burnings occurred. Harbinger, who will be the main sacrifice at the event, is thrilled.

“I’m really hoping that we can not only meet those that preceded us but really feel their pain. It is through their pain that I will be redeemed with the infernal underlord.”

At press time, a source at City Hall said the Cult had yet to be approved for the proper permits.