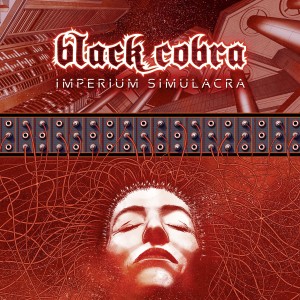 California’s Black Cobra have steamrolled through four albums of Eyehategod dense sludge and the military strict march of High On Fire, but with more energy than the both of them. On their fifth full length, Imperium Simulacra, the band retains their venom but returns from a 4 1/2 year gap showing a level of maturity only hinted to this point. This is as far from their caustic debut Bestial the band has ventured with slow builds, bluesy bridges and a larger focus on melody. But make no mistake, at the end of the day this is still the same Black Cobra.

Themed albums are nothing new to the band and this time out they tackle the ever closing gap between artificial intelligence and humans. With phones and tablets becoming appendages, we are on an inevitable and definite crash course with this reality. Of course, us humans will lose and end up sharing the same fate as the head jacked into the network depicted so vividly on the album cover. Skynet — Matrix anyone? As per usual, the band’s sound is as massive as the theme it surrounds. With only two members it seems implausible at times that they could deliver the way they do but seeing them in a live setting will make any doubter an instant believer.

Diversity is something the band has dabbled with in the past but only in small doses. Here the doomy dirges that build, painfully slow at times in contrast, and the clean higher tone guitar work skip the toes in the water approach. Instead they fully immerse themselves on the longest song of their career “Fathoms Below”. It’s a muscular mix of rolling thunder and slower methodical plodding. Staying close to this formula is “Dark Shine” except here, fuzzed out blues licks and psychedelic pedal effects bookend the percussive bashing from Rafael Martinez. Besides the diversity shown on this pair of tracks, Jason Landrian’s vocals have smoothed slightly since Invernal. Still burly but his delivery is much clearer and he shows a wider range than ever before.

Pure, unadulterated sonic devastation is something the band has built a career on and decisively deliver on many of the tracks here. Even so, the varied output throughout makes it tough to pick a highlight. The alien-esque riffs in “Sentinel (Infinite Observer)” and the swing type rhythm halfway through “Technical Demise” energize the classic Black Cobra sound. However, no track  is deadlier than the punkish grind of “Obsolete”. Blinding speed juxtaposed with their brand of galloping rhythmic patterns turns the eardrums to dust in seconds flat.

Since forming in 2001, Black Cobra have been extremely consistent and unwavering in their output. On Imperium Simulacra they do the same but take chances that broaden their established sound immensely. The level of patience and maturity in the songwriting has paid off. In addition there’s enough of the old material to keep the diehards happy so with this well-rounded fifth release the band has yet another album under their belts that simply cannot be missed.

Imperium Simulacra is available now on Season of Mist. For more information on Black Cobra visit the band’s official website.