These days cassettes are all the rage. With the entire music industry switching to a digital system, where your purchases can be tracked, locked and controlled, cassettes have exploded as the new vinyl. They are more affordable, more nostalgic for today’s mid-20-somethings and they sound like absolute garbage. But there is something refreshing, reassuring and comforting about the clickity-clack of a cassette going into it’s deck, clicking closed and then hissing at you before it spews forth whatever is contained therein. So kudos to Iron Bonehead joining labels like Caligari Records in putting out limited edition tapes. Today we look at one that’s out March 11, 2016: the mysterious New Zealand bestial black metal collective of Veneficium and their self-titled debut.

Veneficium is one of those bands that protects the identity of its members with an iron fist. All that is known as of the release date is that the band is collected from members of New Zealand’s underground. And, when you talk bestial metal, what better country to visit than New Zealand home of bestial metal warlords Diocletian, may they rest in peace. Veneficium is not in the chaotic, war-driven vein of Diocletian but there are certainly similarities in production value, instrumental sound and vision.

If the term psychedelic could be applied to bestial metal, Veneficium have certainly given it the old college try. The final track “Mordant Photism Above Cathedrals of Ash,” the longest of the three, contains extended periods of what amounts to organically created instrumental noise. The track hums and drags through a muddy abyss as the almost reptilian vocals gurgle from beneath. The effect, as the overall pace is slower, is the creation of a nearly psychedelic version of bestial metal. 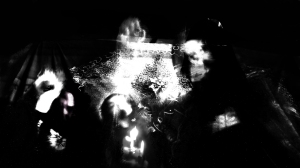 In contrast, the opening track “Mefetic Exhumations” contains more pace and drive than it’s foil. Blast beats rear their ugly head filled with cymbal crashes at the front of the recording and the bass drum buried in the underbelly of the mix. The shortest track of the three,  “Mefetic Exhumations” adopts a nearly march pace for its final two-minutes giving it the war-like feel of heading off to battle.

Veneficium are nothing new in the metal scene. There are bands aplenty that make thick, burping tracks filled with layered, evil vocals. What they are, however, is a solid band portraying a blend of bestial and black metal that is tinged with death metal influences across the vocal performance. It’s a short march through the swamps of New Zealand and, being put out on cassette, provides just enough campy caché to make it feel unique and exotic. It’s definitely worth a few spins or whatever you call playing a cassette.

Veneficium is available on cassette 3.11.2016 via Iron Bonehead Productions. For more information on Veneficium visit their Facebook page.