British punk rock, which was built from American blues, soul and early R&B, gave birth to many forms of music. For children of the 80s across the pond in rural America none were more important than post-punk, goth and, eventually, industrial and metal. Even saccharin pop acts like Spandau Ballet started out as aggressive, groove-oriented bands playing dancehalls in London. Thus, the goth movement is built on more than just pale faces and platform boots. The bands are not only talented and compositionally sound but also inspirational and, for the most part, they sound happier than their genre would imply. Alaric lean heavily on the post-punk school of British goth-tinged rock for their sound and on End of Mirrors they achieve a rebirth of the genre not seen in America since 1980s Christian Death or 1990s Switchblade Symphony.

The largest change between Alaric’s 2011 self-titled release and 2016’s End of Mirrors is the enlistment of Thomas Dimuzio, a soundscape artist who utilizes synthesizers (specifically a Buchla Polyphonic radio tuner, modular analog synthesizer) and other non-traditional tools to create atmosphere. This addition frees up the guitar (who previously carried a heavy load) to let the bass pour through to the front thus linking the band to the gothic, dark wave British bands that made their updated sound famous. The result is a band that is not only more unique but more focused on a cohesive sound that is not merely a copy of their influences but more of an updated homage to them. 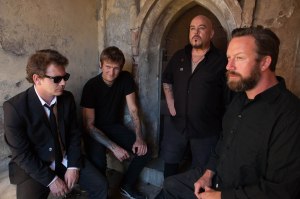 The highlights are the second and third track respectively titled, “Wreckage” and “Mirrors.” Both tracks employee the bass forward approach that makes Alaric and their genre not only hummable but positively danceable (albeit slowly). The vocals are harrowing, utilizing descending chromatic melodies to tug at your heart-strings. The lyrics hang in step, leaving much to be said in between the words. Both tracks show the bands influences but also reveals the road ahead for this diverse yet British-leaning outfit.

Alaric are also adept at guitar forward tracks. “The Shrinking World” opens with sweeping chord changes underscored by that pounding, chorus-filled bass sound. With cymbal crashing, the track feels as wide as the ocean. The guitar even takes on a lead line, handling the melody as the bass slowly ascends.  As the vocals enter, following their familiar descending patterns, the guitars counterbalance with alto melodies.

Alaric are at their best when the pace is slow. When the mood and atmosphere are the focus led by the droning sounds of the chorus-laden bass guitar. And, for all they derive from goth bands, Alaric is after all a post-punk band. Yet their danceability lends credence to the goth label. Regardless, End of Mirrors is a study in all that is great about nearly three decades of largely British driven rock. The darkness, despair and questioning of existence aside, the music is damn catchy and hummable. Simply put, End of Mirrors is 2016s version of Gold’s No Image — an album that doesn’t fit squarely within the metal genre yet will factor largely in the community’s conversation for years to come.

The End of Mirrors is available 5.6.2016 via Neurot and Sentient Ruin (Cassette). For more information on Alaric check out their Facebook page.