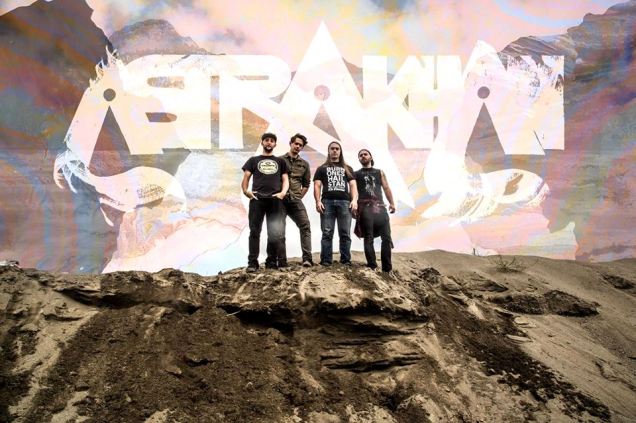 When I was 7 or 8 I saw an episode of Saved By The Bell where they played in a band. I remember freaking out because it was the first time I had ever seen a rock band. I took all the buckets and pots I could find and made a drumset. I played it for months.

As far as success goes, I can only measure that as whether I’ve been happy doing what I’ve been doing. And I have. So yes.

After a lifetime of dumb-fuckery there are very few things that can embarrass me. Now that I’ve said that I’m sure I’ll find something that does it in the next few days. The universe is a bitch like that.

The thing that sticks out for me about metal music, musicians and fans is that no matter where you go people are overtly passionate. Metal fans define themselves by their love for their personal style of music. There is an understanding, an unspoken energy amongst us, like religion, and it’s powerful. The worst things that I see are the people who, like overzealous religious types, try to use that energy to cast hate on people who don’t fit their definition of what a “metal fan” should be.  For me, metal has always been an outlet for pent up anger, fear and sadness. These are things we all share, regardless of the logo on your denim vest.

Though there is a percentage of people who genuinely care about their causes and actually take action to make changes, it seems to me that the majority of the people who are very open about their chosen cause have ulterior motives. Because the majority of social interaction, and the image that you create of yourself, comes from social media, it only makes sense that people will use it to promote themselves in the same way a business would. Everyone wants to give off a good impression. This is logical but the problem arises when people start to believe the lies they tell about themselves, that for example they are strong supporters of such and such a cause and they enter into discussion armed with nothing more that a handful of headlines that they skimmed over. People with loud voices regurgitating the drivel that’s been fed to them by other uninformed people. With this in mind I would say that Astrakhan is not trying to support anything or fight anyone. We write about personal perceptions of our immediate world. Something we know.

Maybe this is the embarrassing story from the previous question….. I think the first heavy band I heard was Limp Bizkit when I was around 12 years old. I wasn’t allowed to buy their albums and that made me want them so much more. The music was terrible and  the lyrics were awful but the darkness and aggression was so inviting for a young boy swimming in his own hormones.

What’s the stickiest you have ever been?

I once did enough acid to fully believe that I was some sort of amphibian and that if I didn’t continually keep my skin moist with red Powerade I would shrivel up and die. Luckily I was in a gas station parking lot at 10am so I could go in and buy another bottle each time the one I was holding ran out. That was some sticky shit.

That’s tough to say. It’s not my bag, it’s yours. I guess just be honest. Nobody needs another writer blowing smoke up their ass if they don’t truly believe what they’re saying.

I think our goal is to be able to see how far we can go. How many cities we can see, how many people we can meet, and how many albums we can record before we slit each other’s throats.  This whole band is just curiosity based. What would happen if we did this? And then we find out and ask another question.

Finally, when you’re not listening to, writing or playing metal, what are some of you favorite albums to listen to currently?

That’s always a tough question but while i answered these questions I listened to Alpha Waves by Enemies and  L’Oceano Delle Onde Che Restano Onde Per Sempre by Neil on Impression. Both albums I would highly recommend.

—
Thanks to Dustan for his time! Check out Astrakhan’s new album Reward in Purpose here.