Brutal denizens of the impending apocalypse, welcome to another Round-Up on Nine Circles!  This time, we feature a label that hardly needs an introduction to seasoned metallers: Blood Harvest Records. We cover five releases in black/death metal here. So without further ado, let’s get started with the first band. Ready, get set, get slaughtered!

“Poisoned Souls” wastes no time starting this album off with proper black metal. And follow-up, “Cult Fire”, rips through tempo changes and hoarse high-pitched shrieks. “Damnatio ad Bestias” wins for most memorable song, featuring a highly addictive sing-along chorus, easily a favorite. “Darkest Prayer” goes a million miles an hour for most of the song. The drums are so far behind the mix, you can barely make out what they sound like through the blast sections. The guitar has that distinct Norwegian fuzz to it and sounds razor-sharp on the slower riffs. The vocals are the higher-pitched variety and very similar to the style of Gaahl (formerly of Gorgoroth). 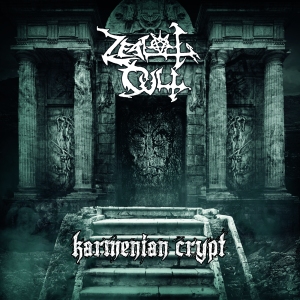 Zealot Cult is an old-school death metal band, and their EP, Karmenian Crypt, comes with a dearth of strumming, rocking riffs. And, while they won’t blow away most veteran death metal fans who may have heard it all, underground shoppers just might appreciate this band’s quality material. Rife with blastbeats and catchy riffs, Karmenian Crypt reminds me of Altars of Madness era Morbid Angel without the over-indulgent squealing Trey Azagthoth lead sections. String bends aplenty, the solos are nonetheless tasteful, short and highly enjoyable.

The members of the band Totten Korps hail from Santiago, Chile, and their death metal style will appeal to fans of barbaric old-school death metal. The musicianship is stellar, and the songs have a really good flow. On their latest, Supreme Commanders of Darkness (available in LP format), the band executes quality death metal for death metal addicts looking for a great new album to sink their teeth into. Totten Korps is a promising band from South America, which is known as a haven of death metal practitioners. If you’re looking to try a new death metal record, regardless of scene and lack of hype, give this five-piece a chance to blow your mind. Intense. Brutal. Well-written. What more can you ask for from a Blood Harvest Records band. Plus, the LP is a full-length album’s worth of convincingly good material!

Ghoulgotha play dissonant death metal with little empathy for smooth, predictable melodies. The members of Ghoulgotha are more than capable when it comes to delivering their style of difficult death metal. The average metal fan may not appreciate these sounds, but for those who do, this is something special and I dare say unique.

Ruin, on the other hand, play harrowing noise/death metal that mostly chugs along at slower tempos. The vocals sound deranged as simple chord progressions make their way throughout Ruin’s track “Becoming Disease”. Heavy, at first lurching like a zombie, then picking up pace and smashing everything that stands between them and the things they hate, the track ends with guitar noise, gurgling/snarling vocals, and tons of feedback. This band plays raw, intense music a’la Primitive Man. Particularly in how they exhibit their simmering, primal aggression from the first note to the last.

Since when did Blood Harvest Records release technical death metal? Since Polyptych showed up with a new record, of course! Tech death of good quality happens to be an enjoyable sub-genre of metal. Think Demilich, Nocturnus, old Pestilence, Death, and Necrophagist, who might revel in complex interplay between guitar, bass, and drums, but bands like Polyptych keep things grounded in solid melodies, in spite of the technical difficulty pulling off the riffs and beats. Necrophagist didn’t simply play difficult riffs, they played subtly beautiful melodies that inspire stellar musicianship from fans who want to learn how to play. Polyptych offer a different approach with the release of their full-length album, Defying the Metastasis, featuring more elements than bands like The Faceless released in their heyday, the latter band doing so to the chagrin of metal fans while the modern death metal trend was in its prime.

The riffs don’t sound like wankery all over the fretboard for the sake of difficult play, and neither is this an attempt to fuse jazz with death metal. Polypytch’s style of tech death is tasteful, and somewhat dark. There are no obvious attempts at confounding you with pointless arpeggios and sweep picks. This may not be the penultimate tech death album, likewise for its chances to make the year-end lists but fans of this style who hunt and scour for bands like Polyptych should give Defying the Metastasis a chance. The music contained within is minimalist in the typical tech death style, but should be considered by fans of the genre for its stellar quality.

So, there you have it. A mere five picks from a record label with so much more to offer. Blood Harvest is a label that celebrates the underground of metal and does its best to keep fans stocked with albums that span metal’s many genres. Make sure and give them a visit on Bandcamp, Facebook, and their official website.