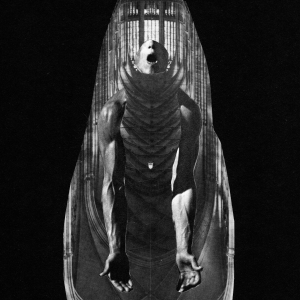 Black metal and noise have always been strange bedfellows.  Both, after all, seek to test the boundaries of what would be considered “listenable” in various capacities.  It stands to reason, then, that the combination of the two genres would be the ultimate essence of this desire to make the darkest and harshest music imaginable.  Enter american, and their new album Violate and Control, which sees the band utilize these concepts to create something truly menacing.

american, a two piece band from Virginia, fuse together a mix of black metal, industrial, sludge, and harsh noise.  Violate and Control, the band’s first album since 2014, is a monstrous thing indeed, full of noisy static, razor sharp black metal, and neck snapping mid-tempo dirges.  “Bedsheet Ossuary” hits like a ton of bricks with its droning industrial black metal assault, “Defecting Ways” is a doomed-out trudge accentuated with warped guitar lines, and the album closer “Paradise Again” is a thick wall of industrial noise that sounds like all my anxieties made manifest.  The overall feel of the album is cold, mechanical, and uncaring, yet there are flashes of warmth here present in the guitar melodies that keep the album from being too caustic.  american clearly know how to keep the listener interested, and there is enough variance here both stylistically and in the push/pull of melody versus atonality to engage anyone over the course of the album’s run time.

Everything here is crafted for maximum discomfort, so to say I enjoyed listening to Violate and Control may be a little unorthodox, but damn did I enjoy listening to this album.  It’s eerie and uncompromising in its vision, but it is nothing if not effective.  american distill the most vile and aggressive parts of each of the genres they borrow from and like a blended whiskey bring them into balance to create something that is on the surface harsh, but has character and appeal for those who take the time to understand it.

Violate and Control will be available June 23rd on vinyl and cassette from Sentient Ruin and Fragile Branch in the US and Shove Records in Europe.  For more information about the band, check out their Facebook page.

One thought on “Album Review: american – “Violate and Control””