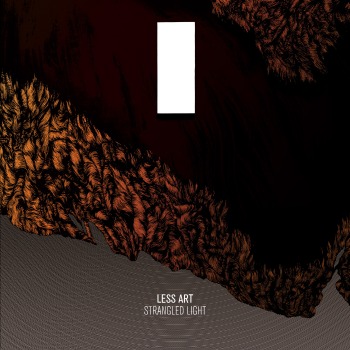 Once again we call to our friends in the Great North to assist in some gnarly metal reviews.  Today Jonathan Petkau from various endeavors including Respectably Loud, Domestikwom and Spacekau jumps in to cover the debut from Less Art…

If I were forced to pick a single word to encapsulate the experience of listening to Less Art’s debut album Strangled Light, the word that comes to mind repeatedly is “clarity.” I suspect that probably derives from the fact that Less Art is composed of veteran musicians each with already established careers, as Strangled Light sounds like what should be a band’s fourth or fifth album, not their first swing at bat (a pun for all you Puig Destroyer fans out there.)

There’s clarity in the song arrangements. Ed Breckenridge and Jon Howell’s guitars always rip around and complement each other, and rarely double up on parts. That space in sound allows Ian Miller’s bass guitar to stand out more, even in the more aggressive songs like “Pessimism as Denial.” Riley Breckenridge on drums ably matches the varying pace of his bandmates, bashing away with ferocity or with more restrained nuance as the situation requires. And on top of all of that sturm und drang, sits the vocals. Speaking of which…

There’s clarity in the lyrical themes. Whether on a scale that is personal “Mood 7 Mind Destroyer: Guilt” vs global “Crushed Out,” or conceptual “What is it in Man?” vs concrete examples “Diana the Huntress,” this album is bleak on all fronts. Delivered with mostly undistorted shouting by Mike Minnick, there’s not a lot of hope to be found anywhere here. While there are real life evils called out and condemned (hello evangelically fueled capitalism), there’s not an accompanying feeling that those evils can be overcome. Even the most arguably optimistic tracks like “Optimism as Survival” and the title track describe a diminished, injured sense of survival, not based on any life experience to date, but because what else is there to do?

There’s clarity in the production. While the above mentioned song arrangements take care of some of the work, it doesn’t hurt to have Scott Evans (Antisleep Audio and fellow Kowloon Walled City member) handling the production as well. I’ve been trying to avoid making lazy comparisons to the members’ other bands, but both the mixing and various guitar and drum sounds do recall Kowloon’s 2015 album Grievances. This is not a complaint.

There’s ultimately clarity in purpose. Regardless of the angle considered, there is no waste to be found on Strangled Light. Less Art may jokingly refer to this album as “post-hardcore for post-youths” but it may actually belie the truth of the album, that it is created by experienced pros who know what they want and have no time for bullshit.

Many thanks to Jon for his time!

Strangled Light is available July 28 on Gilead Media.  For more information on Less Art, check out their Facebook page.