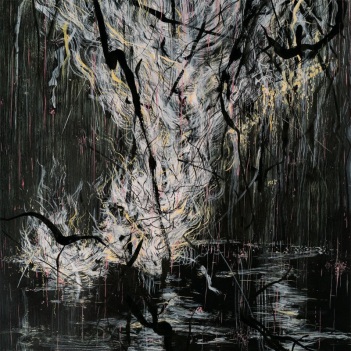 The music of Sumac seems to always exist in states of perpetual construction and deconstruction. On a macro level, the trio of Aaron Turner, Nick Yacyshyn and Brian Cook frequently conjure up some truly giant apocalypses. And yet on a micro level, there’s all kinds of jagged and uneven sonic qualities brought to the surface that create a texture of crumbling brittleness. Picture a skyscraper heavily damaged, still standing but with huge swaths of rebar exposed. In this metaphor Love in Shadow, Sumac’s most recent 2018 album, tries to patch up the crumbling sections without losing its distinctiveness.

It’s easy to lose track of the fact that Sumac’s first album, The Deal, only came out in 2015. Initially the brainchild of Turner, he recruited drummer Nick Yacyshyn on the advice of producer Kurt Ballou, and Brian Cook to play bass for the album sessions. Fast forward three years and more albums, including a collaboration earlier this year with Keiji Haino and Sumac feels like a fully fleshed out band instead of a singular project.  The trust inherent in this kind of process is even more on display with Love in Shadow.

While the timeline between creation of Love in Shadow and the Haino collaboration can get a bit fuzzy to nail down specific causation, the two albums  correlate to an ever increasing interest in improvised song writing on the part of Sumac’s members. Those intricate and thunderous post metal riffs which populated their first two albums do appear on Love in Shadow, and yet the ambient space between riffs you’d find on previous albums is largely replaced with quieter jams: members taking turns leading the others, something only possible when there is a high level of cohesion. The end result is an album that – while familiar at its core – feels more varied around the edges to previous releases. That improvisation isn’t just limited to quiet moments either. Just check out the monstrous bass-led jam that starts “Arcing Silver.”

The decision to record live is both a prerequisite to accomplishing the stated improvisational goals and also a feather in the band’s cap given how successful the results are. Kurt Ballou again worked to record and later mix the live proceedings, and the results are as spectacular as you’d hope for. While being a trio does make it easier to discern what each performer is doing, that detail isn’t lost even when the band is raging at full force. The mix also handles the increased dynamics well, highlighting the additional colors on display.

From its inception, Sumac has tried to contrast complex riffs against noise that seems to stand apart from even the standards of post metal. Love in Shadow bridges these extremes in a consistently compelling way, and overall shows the level of growth even in this band’s short lifespan.

Love in Shadow is available now from Thrill Jockey Records.  For more information on Sumac, check out their Facebook page.

One thought on “Album Review: Sumac – “Love in Shadow””