Receiving the Evcharist is our weekly feature where we pair choice albums with our favorite libations.  Drink from the cup of heresy. This week’s offering: Portrayal of Guilt’s Let Pain Be Your Guide and Modern Times Brewing Company’s Bedrock Nitro Brown Ale.

The Metal: Portrayal of Guilt’s Let Pain Be Your Guide 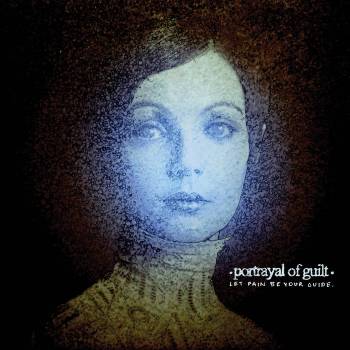 Portrayal of Guilt have long been one of my favorite acts in modern screamo to listen to.  Their short but incredibly sweet discography garnered endless replays from me, and when I found out they were teaming up with none other than my favorite record label to put out a long-awaited full-length album, I was completely over the moon.  I fully expected this to be an album that grabbed me immediately, so when my first listen was over and I felt more off-put than anything else, I was a little disappointed.  It wasn’t until after a few listens, which admittedly the albums twenty-two minute run time helps make easy, that all the nuances of Let Pain Be Your Guide sunk in and I finally had that eye-opening epiphany I had been hoping for.  Combining the frantic energy of pageninetynine and Orchid with touches of modern hardcore and a distinct metallic sheen, Portrayal of Guilt showcase a masterful ability to pay tribute to the sounds that shaped them while moving hardcore into fresh territory.  Let Pain… is a dark and uniquely emotive album, and is undoubtedly the best hardcore album I’ve heard all year, and maybe for more years to come.  There is something to be said for albums that have an immediate effect on you, but the albums that take their time to germinate are often some of the most memorable ones.

I’m a simple man: I see a Modern Times beer, I buy it.  In this case, it’s a brand new (to my eyes anyway) seasonal release, and a good one at that.  Bedrock is a brown ale brewed with coconut and coffee, two perfect flavor profiles for the style.  The coffee brings out the nuttiness in the malt profile of the drink and adds a richness and depth, while the coconut adds a bit of funk and brings out the acidic tannins in the coffee to cut through an otherwise heavy and sweet brew.  Bedrock is also a nitro beer, which gives it an incredibly silky mouth feel.  Its hard to say much else; Modern Times is one of my favorite breweries going, and this is just another in a long line of successes for them.  If you don’t know, now you know.

Thanks to my friend what’s his name, Jeff I think, for covering for me last week.  It’s good to be back in something resembling full health.  Don’t eat lettuce.  Whether the CDC tells you it’ll kill you or not.  Just…fuck lettuce.  And this is coming from a vegan, so you know I’m serious.

One thought on “Receiving the Evcharist: Portrayal of Guilt and Bedrock Nitro Brown Ale”