Receiving the Evcharist is our weekly feature where we pair choice albums with our favorite libations.  Drink from the cup of heresy. This week’s offering: Cerebral Rot’s Odious Descent Into Decay and Three Weavers Brewing Company’s California Radler. 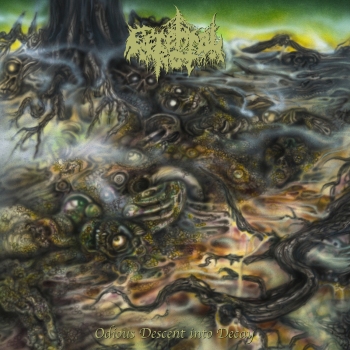 I’m hopping back on the 20 Buck Spin bandwagon, and not for the last time this month either, to present to you another heaping helping of terrifyingly good death metal.  Continuing the undeniably strong output XXBS has had this year is Cerebral Rot and their debut full-length Odious Descent Into Decay.  It’s always a treat when a band sounds like their name implies, and Cerebral Rot definitely conjur up the aural equivalent of your brain leaking out of your nose.  Riding on the strength of a putrid atmosphere conjured by gnarly vocal effects and gurgling instrument tones, Odious Descent taps into death metal’s long-standing affinity for all things gross and gory, and manages to deliver riffs that match the swampy aesthetic perfectly along the way.  The songs on this album have a tendency to start on the slower side, gradually morphing from a mid-paced lope to full-on blasting explosions, keeping a tension that both compliments and expands upon the grotesque atmosphere the album steeps itself in.  The combination herein is a recipe for one of the most addicting death metal albums I’ve heard this year, and I know I’m not the only one on staff here that feels this way.

We’re back in the world of lighter beers this week after last column’s foray into the dark side.  And we’re back with Three Weavers Brewing Company once again for something new from, for me and for you.  Well maybe not you.  Three Weaver’s California Radler is a beer brewed in a classic German style with lemon, lime, and tangerine flavors added.  In writing this column, I researched what a radler was, and it turns out it’s a mix of beer and fruit juice that German cyclists used as a kind of sports drink.  I don’t know how scientifically sound that is, but this beer sure hits the level of refreshment I would expect.  The combination of fruits plus the golden ale base, ironically enough, reminds me of a completely different citrus fruit: the noble grapefruit.  It’s not quite sour-ale levels of puckering, but there is a nice amount of tartness here to balance out the sweetness of the fruit and the richness of the golden ale base.  The low ABV means this is a nice day drinking session beer, and in the kind of heat we’re having right about now, that sounds like a damn fine time to me.

One thought on “Receiving the Evcharist: Cerebral Rot and California Radler”