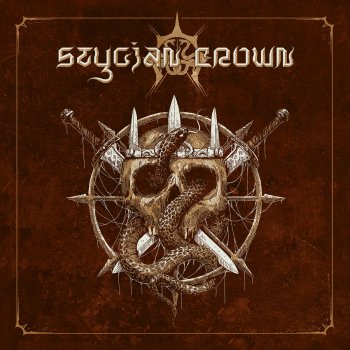 Traditional metal continues to forge a path that is refreshing to these old ears.  Toss “extremity” out the window and ride hard and steady on a riff, nail that groove with the eye of a sharpshooter and carry that melody to the end of whatever metaphor I lost a few words back.  Point being, this debut self-titled full length from Stygian Crown is good.  Damn good.

Coming out of Los Angeles, CA and featuring members from Morgion and Gravehill there’s a death/doom glint to the eye of the shaggy beast that rears its head on the album, with tracks like the opener “The Hall of Two Truths” and follow-up “Devour the Dead” exhibiting a crunchy bite to the guitars.  But those glints, rather than define the whole that Stygian Crown has to offer, acts instead as a counterbalance to the more traditional elements, a large portion of which comes from vocalist  Melissa Pinion.  Beyond her vocal prowess (something that stands out from the mass of other trad metal bands) she also handles the lyrics and much of the riffs, working with Gravehill drummer Rhett Davis handling the arrangements.  The amount of work and reworking that went into the album shows in how tight the songwriting is – despite lengthier tracks like “Through Divine Rite” and “Flametongue” running over eight minutes, there’s isn’t much fat to be found anywhere on the album.

What can be found, though, are plenty of intricate riffs that march, trample, and scorch the earth as needed.  Three of the songs: the aforementioned “Through Divine Rite,” “Flametongue” and “Trampled into the Earth” are reworked from the band’s demo and given much deeper, aggressive arrangements that fit right in with the newer tracks.  And these new tracks have  some vicious hooks: starting backwards, just feast on that opening riff for “Two Coins for the Ferryman.”  A lot of the press for Stygian Crown (and Stygian Crown, for that matter) is rightfully going to talk about how good Pinion’s vocals are, but without the way the twin guitar attack of Andy Hicks and Nelson Tomas Miranda hack and slash and come together in wicked harmonies, or the way the bottom end is carried with clockwork precision by Davis and Jason Thomas on bass you wouldn’t have the potent brew of epic doom and metal on display here.

The first half of 2020 have hit some high water marks with the likes of King Witch and Sorcerer showing there’s more to trad/doom than simply evoking Candlemass at every turn.  And Stygian Crown continue that crusade with some truly serious songs that relentlessly point the way to a future where we’re all slamming our heads and holding our fists aloft to hail the coming of the rock.