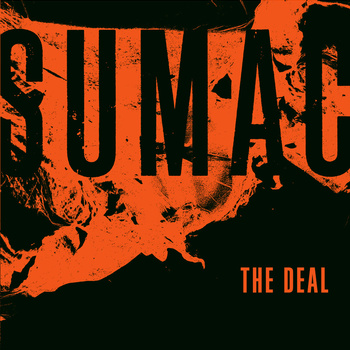 As I was reading about metal supergroup Sumac’s new debut album, The Deal, I was thinking: we often reduce what a band sounds like to a mere math problem. There’s one member who’s also in a hardcore band, one who used to be in a sludge band, and one in a doom metal band. And, as press releases often breathlessly claim, the band they’re all in together sounds like a mixture of those styles. Groundbreaking! So what happens when your math problem consists of Aaron Turner (Isis, Old Man Gloom), Brian Cook (Russian Circles, These Arms Are Snakes), and Nick Yacyshyn (Baptists)? Does the proven skill of the combined musicians ensure that the music will be greater than the sum of its parts?

With Sumac, the answer is not necessarily. My initial reaction to The Deal was that there was a lot more prog than I expected. Take the middle section of “The Lion’s Paw,” for example. Repeating guitar lines weave in and out of one another, and there are lots of detailed musical sections that clamber on top of one another. Sometimes one part of the song is trying to progress, while another keeps appearing and puling it back. The band sounds like a big heavy machine rumbling to life—each part in top working order, though often content to chug along in the background.

After repeated listens, the similarities between Sumac and Turner’s other project Old Man Gloom became more obvious. Even though The Deal is relatively short, especially inside of the long atmospheric tracks that bookmark the album, Turner likes to take his time. Motifs are repeated endlessly, like in the middle of “Hollow King,” where the band and lead guitar take turns tossing a riff back and forth until the song ends on the same two notes played over a background of explosive feedback.

Even though each member of the band has incredible technical skill, there weren’t a lot of moments that grabbed my attention on The Deal. The introductions to the four main songs on the album all start off strong, and each one has moments where it rolls along. Especially during the second half of the title track, the combination of deep, growled vocals and some of the simpler riffs on the album recall a bit of Thou hitting a melodic stride. But in general, there weren’t many instances where I felt compelled to punch the air and tell strangers on the street about Sumac.

And so, to answer my question of whether the members of Sumac together are worth more together than individually? Let’s just say I’m glad they didn’t give us an album that takes that question all too seriously.

The Deal is available now on Profound Lore Records. For more information on Sumac, visit the band’s Facebook page.