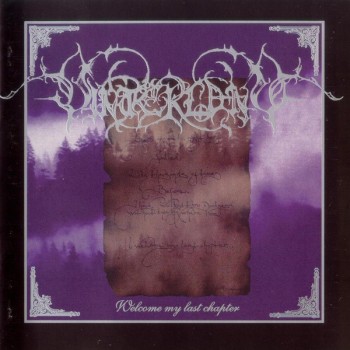 Darkness and cold. Eventually, as winter yields to spring, my need and desire to toss those words around will diminish. Which is a shame, because let’s face it: black metal is amazing. Few genres force listeners to fully immerse themselves in the environment constructed around them like some of the black metal greats have done. So, while the snow continues to fly—somehow… even as I write this on the night of March 3—I’m going to seize every opportunity to revisit some of this amazing work. This time, I’m going to dig into the incredible work that is Vinterland’s Welcome My Last Chapter, one of the most prized pieces from the aforementioned style of metal in my collection.

Vinterland released their first, and only, full-length album way back in 1996. That’s right, 19 years ago. And aside from a couple of demos titled A Castle So Crystal Clear and It’s Here I Belong, released two years prior, there is absolutely nothing else in their discography. The Swedish trio called it quits less than a year after Welcome My Last Chapter was released. However, 2011 saw the band reemerge onto the metal scene for a series of metal festivals around the globe. Among these festivals was 2013’s Maryland Deathfest, an event I was lucky enough to attend.

I’ll be honest, I went into MDF that year excited about seeing these guys… but with no prior listening experience whatsoever. But come on, with a name like “Vinterland,” they can only bring us good things, right? Well, actually…that’s exactly right. They delivered at an absolutely incredible level, especially for a band that had completely disappeared for the better part of 14 years. That weekend brought my first taste of Welcome My Last Chapter and I’ve been hooked ever since.

So let’s talk about the actual music. This album has a very traditional black metal feel—filled with relentless tremolo leads and furious blast beats. The vocals have a dark, echoing harshness to them that just penetrates your skin. The whole thing explodes out of the gate with “Our Dawn of Glory” and if you aren’t immediately captivated by this track, well…I will never be able to figure you out. Everything this album is going to be comes at us in this initial track, including a nice subtle symphonic atmospheric that just makes the whole thing all the more intoxicating. This element is utilized brilliantly on the “The Vinter Breeze,” arguably the highlight of the album for me. These black metal themes never truly leave us throughout the 50 minute album. And that’s a good thing, because they do it so goddamn well.

Sure, things slow down from time to time on tracks like “A Castle So Crystal Clear” and the early stages of “As I Behold The Dying Sun,” not to mention the instrumental breaks that we get from “So Far Beyond…(The Great Vastforest)” and most of “Vinterskogen.” But nothing on this album detracts from its true essence—powerful, dark, despair-ridden black metal. Each track is well-written, and there are enough tempo changes and varied layers—even the occasional haunting, spoken lyrics—to keep it interesting from start to finish. Everything about this album is simply mesmerizing.

It’s a shame these guys only have the single full-length to their name…and one that’s borderline impossible to get a hold of, at that. Fortunately, I managed to link you guys up with a video covering the entire album. So, without further delay, do yourselves a favor and grab a glass of red wine, light some candles, and let Vinterland take you on a journey through an abyss of pain and sorrow…