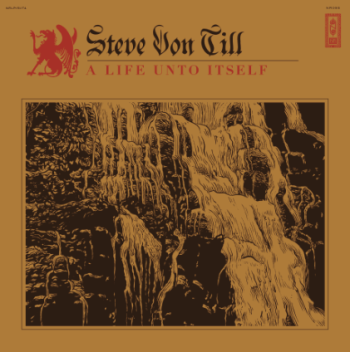 By this point in your musical journey you’ve probably feasted upon and digested at least some of the Neurosis catalog—at least you should have. Thus, you’ve probably heard Steve Von Till‘s voice in some capacity—although unless you’ve listened to his solo albums, you may not have heard it in such a sparse, traditional setting. And even if you’re a fan of his solo work you probably haven’t heard anything this beautiful from him. And “beautiful” is about the only adjective worthy of describing his newest release, A Life Unto Itself—an album rife with equal parts intimacy, swagger and swoon.

A Life Unto Itself is a hauntingly addictive experience. Where Von Till’s previous solo releases lean toward a more European, Celtic folk style, A Life Unto Itself provides a genuinely American experience by interspersing elements of ambient country alongside traditional folk structures. That’s not to say that Von Till has completely abandoned the Celtic balladry—that’s still the backbone of his writing—but he’s stripped things down here, adding atmospheric touches with layered synthesizers, eerie strings, lap steels and electric guitars to make his songs truly come alive. To say his voice is raspy would be an understatement; it’s like a combination of Tom Waits and Kathleen Turner after a night of smoking and binge-drinking. Yet somehow, as the sun rises over all that debauchery, it’s gorgeous, similar to the beauty that emanates from so many once proud but now decaying American cities.

Whether you’re listening to the eerily psychedelic droning “Night of the Moon,” the sparse, romantic “Birch Bark Box” or the life-altering beauty of the title-track, you’re certain to be emotionally invested in the music flowing forth from the watery springs of Von Till’s fluid songwriting. It’s that subtlety that allows him to craft his score to so perfectly compliment his captivating voice. Thankfully for the listener, it seems he knows the power and strength of his voice and manipulates it perfectly for each moment, effortlessly pouring out lyrics detailing his burial plans and his need to be remembered by his family after he is gone. The album is cohesive, brilliantly experimental and extremely focused. But even without paying attention to the tiny details, it feels very much alive—evolving with each and every listen. It ends up feeling uniquely personal, as if Von Till crafted it specifically with you in mind.

And frankly, that’s how great music should feel. This piece of Americana rides on some ethereal plane between Manifest Destiny and the crazy pace of our modern societies. It’s a tremendous album in both its simplicity and its quietness, but that in no way makes it unnavigable for modern times or fast-paced folks. It’s as easy to absorb while drinking your morning coffee as it is during those lonely, late-night, self-pitying drinking sessions. So listen to it, hold it and cherish it.

A Life Unto Itself is available on Neurot Recordings. For more information on Steve Von Till, visit his official Website.

2 thoughts on “Album Review: Steve Von Till – “A Life Unto Itself””