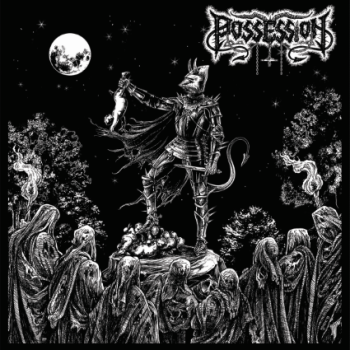 For today’s Throwback Thursday we are going all the way back to June 5, 2015—quite a jump, I know—to check out Belgian black metal purveyors Possession and their newest EP, 1585-1646. This was an album that we very badly wanted to review but we saved it for a new column entitled “Drinking with Satan,” which Corey will be debuting tomorrow. Except, well, he got drunk…and, being drunk, chose another album. So all the better for us! Let’s jump back three weeks and get our #tbt on!

1585-1646 was released as a 12″ and features four-tracks spanning just under thirty minutes. The fun part is that this period piece is based on an original story about a witch residing in France between the years of, you guessed it, 1585-1646.

The first track, “Obscurity,” which has an extended six-minute introduction, is used as a sort of mood setter. You’re invited through the wormhole and into the medieval era where witches were not only real but also heavily persecuted. Things get dicey on the second track, “Ceremony,” in which the devil himself visits the witch to propose a pact which she readily accepts. As side B explodes with “Guilty” we find our witch hotly pursued by a town mob ready to burn her at the stake. Sadly, by the fourth track, “Ablaze,” our witch’s fate is sealed and the town mob gets their wish of burning her.

Period pieces can be rote and tiresome. In pursuing them, bands can get overly caught up in the story and fail to write music that captures an audience. Possession have overcome all obstacles and, although the EP is short, it features some of their best work to date. 1585-1646 is exceptionally consistent and consistently great. It’s a terrific EP that is well worth the short investment. It’s likely to be an album listened to over and over again, which is bad news for the witch, I suppose, as her ending never changes. She is set ablaze each time.

1585-1646 is available now on Iron Bonehead and Invictus Productions. For more information on Possession, visit the band’s official website.