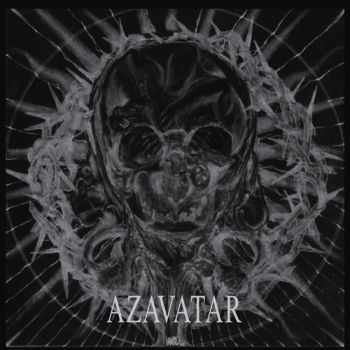 Less than two years after their formation, here comes German four piece black metal troop AZAVATAR with their self-titled debut album. All songs start with a “k” and each letter “u” is written as a “v”—gee, guys, d’you think this is gonna be kvlt? All joking aside, this is a brash and in your face black metal album that isn’t afraid to let the riffs, let alone the doom, shine through.

Album opener “Kvlt” begins with an apocalyptic, heavy guitar tone, before becoming ground-shakingly heavy once the drums come in. Around the halfway mark, the guitars slither into a weird pattern, almost reminiscent of a swarm of bees, adding to the depth of the song rather than hindering it. It’s a weird sound, to be sure, but I kind of dig it.

The broader concept on AZAVATAR is, of course, the hate of worship, and being born into an existence with no meaning. The band’s use of atmospherics on track number three, “Kvrse,” sounds almost like a fire touching the earth. Keyboardist umbrA builds the tension like a horror movie soundtrack over an intense, double-kick drum pattern and slower guitar riffs reminiscent of Craft at their doomiest.

The band certainly isn’t afraid to let that doom flag fly, and they fly it well on “Krest.” Through the opening three minutes, they serve up a nasty, sludgy sound with vicious vocals that range from yells to a gravelly death croak. Around the four-minute mark, the doom fades and the epic, melodic section starts—undoubtedly my favorite moment on the album. This then gives way to more sonic-speed black metal, before the song then weaves in and out of doom and finishes strong with a proggy section. It’s a dizzying array of styles all done to near perfection, and this track pulls ahead as one of the most memorable ones I’ve heard in some time.

AZAVATAR has crafted a unique exploration of sound here, all while keeping it extreme for the entirety of the five tracks and 50-plus-minute run-time. The band does a great job of pushing boundaries while keeping things interesting and fulfilling, and I definitely recommend checking this one out.

AZAVATAR is available now on Art of Propaganda. For more information on AZAVATAR visit the band’s Facebook page.