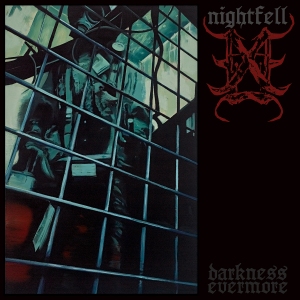 It was only February 2014 when Nightfell released their debut LP The Living Ever Mourn. That album was met with praise, adulation, and a just a wee bit of well-deserved multiple orgasming. Only a year (and a few months) later Nightfell is back with Darkness Evermore. Their sophomore LP is similarly blackened and dark and seemingly hell bent on dragging listeners into its scorched earth, post-apocalyptic landscape. Darkness Evermore is a tremendous album that will battle for top spot come year’s end.

Nightfell (as it has been known as a studio band) is comprised of two men: Todd Burdette and Tim Call both residing in the crusty enclave of Portland, Oregon. Burdette is well known for Tragedy, His Hero is Gone, Warcry and Severed Head of State (to name a few). Tim Call is equally well known for The Howling Wind, Saturnia Temple, Sempiternal Dusk, Aldebaran, and Mournful Congregation (again, to name a few). It’s hard to call a two-man band a supergroup but it’s hard to find a better combination of pedigree than Burdette and Call. And they draw on all that experience for Darkness Evermore where their confidence and restraint are on full display.

Call, capable of blisteringly fast and chaotic drumming keeps his feet active and his hands tight throughout the record providing the backbone of their music—an entrancing rhythm. His almost tribal drumming perfectly compliments Burdette’s guitar work. Burdette, who is normally called upon for his distinctive voice and thick, crusty guitar abilities, has shown, with his work in Nightfell, how much more he is capable of. Playing all string instruments (aside from cello) Burdette weaves thick guitar chords with atmospheric touches and lead harmonies that result in a thick array of guitar sounds that convey messages almost as well as words.

Darkness Evermore consists of four actual tracks and two interludes with a run time of just over forty minutes. From the breathtaking cello work (by Julia Kent) that opens the album to sparse, but groovy, finish Darkness Evermore is a complete, connected and wholly integrated work. A journey of sorts as suggested by the song titles: “At Last,” “Ritual,” “Cleansing,” “Rebirth,” “Eulogy,” and “Collapse.” As the opening track comes to it’s violent conclusion and the first interlude beautifully leads into the third track, “Cleansing,” the listener is engulfed.

Nightfell transcend any sort of labeling by way of genre. Darkness Evermore is as beautiful as it is evil. It’s a work that reveals influences of black metal, doom and death metal. But it is, in the end, a work that feels apocalyptic. Music created specifically for end times. Embracing mortality and finality which has been a calling card for Burdette throughout his entire career. As tense as it is powerful, Darkness Evermore uses cadences, space, and pacing to entrance the listener.

The recording on Darkness Evermore is thicker and more well-rounded, taking away some of the rawness and hard-hitting that made The Living Ever Mourn so successful. The vocals have perhaps calmed themselves a notch, allowing atmosphere and instrumentation to step in as the aggressor. But, overall, there isn’t much that changed between albums. Nightfell have a formula that works and between Call and Burdette, there is more than enough talent and range to handle all that they conjure forth. Perhaps building not only their own sound but their own genre, Nightfell are hopefully here to stay.