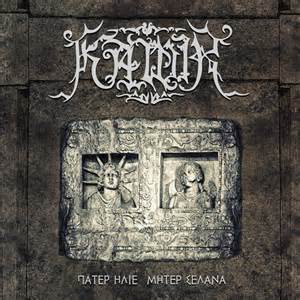 Formed in 1993, Kawir can rightly be considered veterans of the Hellenic black metal scene. For most of their existence, they lived in the shadows of their more prominent compatriots, who go by such names as Varathron, Rotting Christ and Zemial. However, recent years have seen Kawir improve drastically on a musical level, resulting in the band slowly being pushed into the foreground. Their new release Father Sun Mother Moon certainly will not hinder that process, but Kawir enthusiasts might be disappointed that this is the group’s album since 1999’s Epoptia that fails to improve upon its predecessor.

The basics of Kawir’s style are immediately recognizable on Father Sun Mother Moon. Their mid-tempo black metal is built around the guitars of band leader Therthonax, whose taste for rich, playful riffs and tremolo picking have over the years become the band’s signature. This style has always allowed the band to create dense atmospheres while also delivering a great variety of complex melodies that are not often encountered in the ‘atmospheric black metal’ sub-subgenre.

In addition to the strong guitar work, folk influences have been a mainstay in Kawir’s music since the beginning. Still, up until and including their 2008 album Ophiolatreia, most of the folk instruments were present only in the form of a synthesizer. It was on their magnum opus Isotheos (2012) that the keyboards were largely ditched in favour of actual traditional instrumentation, a trend that is now continued and expanded upon on Father Sun Mother Moon. Bells, flutes, lyres and even bagpipes can be heard throughout the album with great regularity, making for an even more convincing Ancient Greek timbre to accompany the band’s latest odes to the Hellenic gods of old.

Kawir’s discography, at least over the past decade, can be understood in the context of a gradual but consistent shift towards folk metal. With its extensive use of traditional instrumentation, Father Sun Mother Moon might well prove to be the final destination of this long journey. Make no mistake: black metal is still the main substance of the band’s stylistic brew, but with their latest songs so openly flirting with aspects of Greek traditional music, this genre tag no longer tells us the whole story. With this in mind, it is no wonder that, in recent years, the group has started to identify with the decidedly vague denomination that is ‘pagan metal’.

While all the ingredients are there to make Father Sun Mother Moon yet another milestone in Kawir’s impressive career, the album is ultimately less than the sum of its parts. Where Isotheos literally had not a single bad riff on it, the band is far less alert on its latest release. Too many riffs rely on basic chord progressions and Therthonax does not always jump in to saturate them with his usual arsenal of lead guitar frills. To add to the woes, Kawir’s usual pacing — be it through changes in tempo, atmosphere or movement — is absent on their new album all too often, bringing some songs teeteringly close to creating that dreaded ‘wall of sound’ effect, a danger that is only augmented by the flat production. To put it more simply, it is the first album in many years where, even after several listens, it is difficult to distinguish between some of the individual songs.

That is not to say this is a bad album. Rather, this is a great album that could have, and perhaps should have been even better when we take into consideration Kawir’s stellar track record. There are certainly moments on this album during which the band’s true potential is unleashed, and we get a taste of the genius that Therthonax has spoiled us with on so many other occasions. Such examples include the vibrant album opener “To the Sovereign Sun”, as well as the anthemic folk metal track “Hail to the Three Shaped Goddess”, both of which are easily up there with the band’s finest compositions. However, in the light of its 64-minute running time, these moments of radiant brilliance are too scattered to dictate our impression of this album as a whole.

It may indeed be the overall length of Father Sun Mother Moon that brings it down. With “To Mother Moon” and “The Descent of Persephone”, the album contains the two longest songs Kawir has thus far recorded. However, those who expect to hear in these compositions the same Odyssean ingenuity that helped turn previous Kawir epics such as “Poseidon”, “Hades” and “Hymn to Apollo” into the band’s most monumental hymns will be sorely disappointed. Particularly “The Descent of Persephone” is too monotonous to captivate the listener for over 11 minutes, as it relies on a single melody that is barely developed over the course of the track.

Placid and overbearing, this final track underwrites the biggest weaknesses of Father Sun Mother Moon. At its peak moments, Kawir’s latest album is easily on par with the Greeks’ best works. But whether it is due to the excessive running time or the fact that Therthonax has had to compose this album without any assistance after a series of line-up changes, the ideas on Father Sun Mother Moon are spread too thin for it to even come close to offering a listening experience that, as an artistic whole, can compete with Ophiolatreia and Isotheos.

In spite of its shortcomings, Father Sun Mother Moon is not likely to put a dent in Kawir’s reputation as late bloomers. The band lays it on real thick with the overenthusiastic song lengths and the straightforward folk metal influence, and frankly this might speak to more people than the subtle genius of Isotheos. No, Father Sun Mother Moon is not Kawir’s best album, but the band’s slightly more ‘populist’ approach may still provide them with some long-overdue recognition from the metal press and a larger audience.

Definitely do not let the album’s flaws dissuade you from spending some time with Kawir’s latest, as it can easily stand its ground amongst other 2016 black metal releases. Bluntly put, Father Sun Mother Moon is a great 45-minute album poured into a 64-minute mould, but that does not negate the fact that the vast majority of this album consists of certified Kawirian excellence. That said, if you truly wish to experience without hindrance the outright magic of which Kawir is capable, get your hands on the arcane masterpiece that is Isotheos.